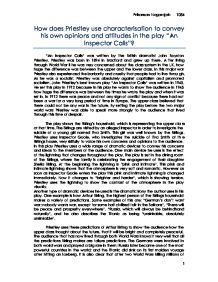 How does Priestley use characterisation to convey his own opinions and attitudes in the play "An Inspector Calls"? "An Inspector Calls" was written by the British dramatist John Boynton Priestley. Priestley was born in 1894 in Bradford and grew up there. After living through World War II he was very concerned about the class system in the UK, how huge the difference was between the upper and the lower class. In this major war Priestley also experienced the barbarity and cruelty that people had to live through. As he was a socialist, Priestley was absolutely against capitalism and promoted socialism. John Priestley's best known play "An Inspector Calls" was written in 1945. He set this play in 1912 because in his play he wants to show the audience in 1945 how huge the difference was between the times he wrote the play and when it was set in. In 1912 there was peace and not any sign of conflict because there had not been a war for a very long period of time in Europe. The upper class believed that there could not be any war in the future. By setting the play before the two major world wars Priestley was able to speak more strongly to the audience that lived through this time of despair. The play shows the Birling's household, which is representing the upper class at that time. The Birlings are visited by an alleged inspector in order to investigate the suicide of a young girl named Eva Smith. This girl was well known by the Birlings. Priestley uses Inspector Goole, who investigates the suicide of Eva Smith at the Birlings house, very skilfully to voice his own concerns and opinions to the audience. In this play Priestley uses a wide range of dramatic devices to convey his concerns and ideas to the members of the audience. One main device he uses is the effect of the lightning that changes throughout the play. ...read more.

These are examples of Dramatic Irony, as the audience knows that they have happened, but the actors do not know this. This is also used to show how idiotic Mr Birling is, as Priestley is a Socialist, and is trying to convey his thoughts about Capitalism into the play, and thus, creating an idiotic character like Mr Birling in the play. The staging is also important, as it says on the stage direction, that the lighting is "pink and intimate", to show that there is something going on in the dining room, in this case, an engagement, and the lighting is pink to make it look like the room is full of love, but gets "brighter and harder", to create tension, when the inspector arrives. Not all of the Birling family are upper class. This is shown by the fact that Mr Birling is provincial in his speech. He also uses colloquial language, like "fiddlesticks", which is unceremonious language, and shows that Mr Birling was not born into an Upper Class family. As we know, he has moved up the Social Ladder through Wealth and the marriage with Mrs Birling. We know that Mrs Birling was born into an upper class family as she knows how to behave, for example, when Mr Birling says that the food is good, and to thank the cook. Mrs Birling then says "Arthur, you're not supposed to say such things-", meaning that Mrs Birling knows how to "act" upper class, and this shows that Mr Birling has not been in an Upper Class family. Mr Birling has gained wealth through the industrial revolution, gaining money through the investments of coal and steel, and thus, gaining money through the revolution. However, we know that they are Upper Class, as by looking at their furniture, and how they are dressed, and that they have a maid. Mr Birling is also planning to move higher up the Social ladder through the marriage of Sheila Birling, his daughter, and Gerald Croft, a successful businessman. ...read more.

Priestley intentionally creates two very different characters so as to show how different the older and younger generations are. Priestley also creates these two different characters because it shows how different people can be, even if they are from the same family. The opinions of Priestley are by the ironic presentation of Mr Birling in particular. It also gives tha audience an insight into a range of political views, for example, capitalism and socialism, giving the audience an opportunity to see if they are concerned with the self, or concerned with everyone. Sheila represents the younger generation, showing change, and Mrs Birling represents the older generation, showing people who do not accept change. Priestley tries to show faults in the thinking of Mrs Birling, and capitalists, and is trying to portray them as hard-hearted and cold. This shows that the younger generations are much more willing to accept change, and responsibility. However, the older generations are not willing to accept change, and think that they are right, as they are older. In conclusion Priestley uses a wide range of dramatic devices to convey his political and social concerns and ideas to the members of audience. He made the audience very clear that the capitalism and egoism that was present in 1912 has to be put aside and socialism has to replace it. Priestley made it clear by using a member of the lower class (Inspector Goole) and the upper class (Arthur Birling) and juxtaposing both of them. By doing this he could make the contrast between the classes clearer and show the opinions and concerns of both classes. He used the Inspector very well to voice his own opinions to the audience. I think this play may still be relevant to today's society because even today there are people that are in favour of capitalism and egoism. This play could convince them that we are all "members of one body" and that we are "responsible for one another". ?? ?? ?? ?? Prikarean Nagarajah 1084 1 ...read more.