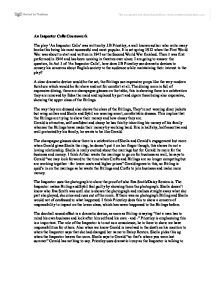 An Inspector Calls Coursework The play 'An Inspector Calls' was written by J.B Priestley, a well known author who write many books this being his most successful and most popular. It is set spring 1912 when the First World War was about to start and written in 1945 as the Second World War finished. Then it was first performed in 1946 and has been running in theatres ever since. I am going to answer the question, In Act 1 of 'An Inspector Calls', how does J.B Priestley use dramatic devices to convey his concerns about English society to the audience while maintaining their interest in the play? A clear dramatic device would be the set; the Birlings use expensive props like the very modern furniture which would be for show and not for comfort at all. The dining room is full of expensive dining, there are champagne glasses on the table, this is showing there is a celebration they are removed by Edna the maid and replaced by port and cigars these being also expensive, showing the upper class of the Birlings. ...read more.

The Inspector uses the photograph to show the proof of who Eva Smith/Daisy Renton is. The Inspector makes Birling and Sybil feel guilty by showing them the photograph. Sheila doesn't know who Eva Smith was until she is shown the photograph and realises straight away what she part she played, she cries and runs out of the room. If there was no photograph Birling and Sheila would not of confessed to what happened. I think Priestley does this to show a concern of responsibility to impact on the lower class, which has never happened to the Birlings before. The doorbell sound effect is a dramatic device, as soon as Birling is saying "that a man has to mind his own business and look after him self and his own - and -" Priestley is emphasising this is a important. The role of the Inspector is to act as a conscience, he is there to show we have responsibilities for others. Also when we know Gerald is involved in the death as his reaction to when the Inspector says that she had changed her name to Daisy Renton. ...read more.

Then the irony of when Arthur says 'as if we'll be in trouble with the police." Only Gerald and Birling know that they are in trouble with the police. When Sheila challenges Gerald about Daisy Renton Sheila realises that it has been only them two and the audience knowing about it, the dramatic device is the cliff-hanger holding the audiences attention. There are many doubts about then Inspector, is he even an inspector, with a name like Goole which could sound and look like ghoul meaning ghost you can understand them having doubts. When the Inspector shows the photograph he could be changing the photograph every time he shows it to a different person. I think this because when he shows it to Sheila he checks around him to see if anyone's looking then Gerald ask to see and he wouldn't let him. And the timing of when he rings the doorbell these are all dramatic devices. I think in Act 1 J.B Priestley uses dramatic devices to convey his concerns about English society to show his concern that we all have a responsibility to consider the effect of our actions on others. ...read more.