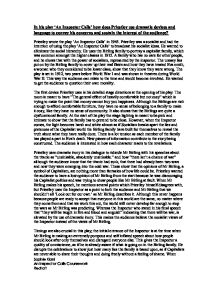 In his play 'An Inspector Calls' how does Priestley use dramatic devices and language to convey his concerns and sustain the interest of the audience? Priestley wrote the play 'An Inspector Calls' in 1945. Priestley was a socialist and had the intention of using the play 'An Inspector Calls' to broadcast his socialist ideas. He wanted to eliminate the social hierarchy. He uses the Birling family to portray a capitalist family, which was common amongst the higher classes in 1912. A family who has no care for other people, and he shows that with the power of socialism, represented by the inspector. The uneasy lies put on by the Birling family to cover up their real flaws and how they have treated Eva smith, a woman who they considered to be lower class, show that they know they were wrong. The play is set in 1912, two years before World War 1 and was shown in theatres during World War II. This way the audience can relate to the time and would become involved. He wanted to get the audience to question their own morality. The first device Priestley uses is his detailed stage directions at the opening of his play. The room is meant to have "The general effect of heavily comfortable but not cosy" which is trying to make the point that money cannot buy you happiness. Although the Birlings are rich enough to afford comfortable furniture, they have no sense of belonging to a family to make it cosy, like they have no sense of community. ...read more.

Mrs Birling is unknowingly putting the blame on her son, because she thinks that the father of Eva's child is someone of a lower class than her. It shows us how high class people always looked down on working class people and believed that only they could do such despicable things. This climax almost breaks the 'bubble' that the Birlings are living in. They pretend that they are good and loving and better than everyone else, but in reality they are the most dysfunctional family, who are worse than everyone around them. The roles of the characters shift during the play as well. Sheila, who is described at the start as "a pretty girl in her early twenties, very pleased with life and rather excited," suddenly assumes the role of the Inspector. She starts to understand that the Inspector knows all the right answers and is intrigued as to how. After he leaves she takes on his role and starts questioning her parents. It is almost as if she is leaving her father's capitalist ideas and is stepping into the Inspector's shoes, conveying his socialist ideas. This shows the audience how socialism is better than Capitalism. Sheila is forced to follow her father's capitalist ideas, nut upon given the choice; she would rather follow the Inspectors socialist idea. Also in that time women were meant to be seen and not heard, but socialism has given Sheila the chance to talk and state her feeling. This again shows that socialism is the better of the two as it shows equality between everyone. ...read more.

He also tries to show this by having the Inspector say that "we are all part of one community," while Mr. Birling says "as if we are bees in a hive," as if the community is vulgar, while the Inspector is showing just how wrong he is. Priestly has constructed an almost complete contrast between Mr. Birling and the Inspector, one representing Priestley's opinions and the other representing Pre World War One social opinions. Mr. Birling is ridiculed in the play with his speeches about the future. Mr. Birling is very explosive in his speech, which shows the uncomfortable nature of Capitalism, and how it can be upset by minimal things. The Inspector is given authority in his speeches and shows he is always calm and in control. This shows the audience that of the two ideas socialism is the better. I think that the main dramatic device used is the idea of collective responsibility. This is a major theme of the play. As well as trying to make the Birling family take personal responsibility for Eva's death he also wants them to know that together they killed her. Priestley wants the audience to take responsibility for their mistakes, he wants them to feel guilty and work together to make things right. The fact that Priestley questions the morality of the audience is what makes them interested throughout the play. The audience feel as if they're the ones that are being judged, and questioned, and that they need to confess and accept their responsibility. This involvement and idea of responsibility in my opinion is what makes 'An Inspector Calls' an incredible, thought provoking play. ?? ?? ?? ?? Sophie Kiani An Inspector Calls Coursework Redraft ...read more.