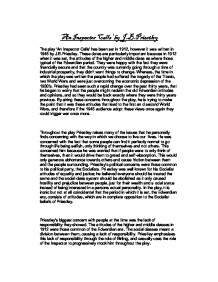 An Inspector Calls' by J.B.Priestley

'An Inspector Calls' by J.B.Priestley The play 'An Inspector Calls' has been set in 1912, however it was written in 1945 by J.B.Priestley. These dates are particularly important because in 1912 when it was set, the attitudes of the higher and middle classes where those typical of the Edwardian period. They were happy with the fact they were financially secure and that the country was currently going through a time of industrial prosperity, they didn't want things to change. Whereas, the time in which the play was written the people had suffered the tragedy of the Titanic, two World Wars and were just overcoming the economic depression of the 1930's. Priestley had seen such a rapid change over the past thirty years, that he began to worry that the people might reclaim the old Edwardian attitudes and opinions, and so they would be back exactly where they were thirty years previous. By airing these concerns throughout the play, he is trying to make the point that it was these attitudes that lead to the first and second World Wars, and therefore if the 1945 audience adopt these views once again they could trigger war once more. Throughout the play Priestley raises many of the issues that he personally finds concerning with the way in which we choose to live our lives. He was concerned with the fact that some people can find it perfectly normal to go through life being selfish, only thinking of themselves and not others. This concerned him because he was worried that if people were to only think of themselves, then it would drive them to greed and self-absorption. This would only generate abhorrence towards others and cause friction between them and the people surrounding. Priestley's political concerns were those common to his political party, the Socialists. Priestley was well known for his Socialist attitudes of equality and justice; he believed everyone should be treated the same and the social class system should be abolished as it only caused ...read more.

It is Priestley's way of stating that his attitude is entirely wrong and that he does not agree with it at all. By interrupting him, it shows the audience that Birling's ideas are corrupt and we cannot believe they are plausible. When the new major character of the inspector is introduced into the play, it has a dramatic effect on the rest of the characters. Before the inspector arrives, the characters seem to be closely bonded, a secure family unit, but as soon as the doorbell sounds, they fall to pieces. At that moment, the characters are quite satisfied with themselves, pleased with their current social status and wealth, even Birling is "feeling contented, for once". The mood of the characters subsequently could not be more diverse, they panic, their dialogue suffers and none of the characters are certain what to say anymore, they are in a general state of perplexity. The character that suffers most from the introduction of the inspector is Birling himself, he goes from making extensive speeches about life and the world, to short statements and questions, which both in turn reflect the state of bewilderment he is in. Examples of this can be found when shortly before the arrival of the Inspector, Birling is talking of the old days and says, "They worked us hard in those days and kept us short of cash", but when he is aware of the Inspector now being present, he begins to sound worried, "An inspector? What sort of inspector?" At first Birling had full control over his family, he was the 'manager' so to speak, but when the inspector enters this superiority crumbles and Birling frantically attempts to regain this dominance. He tries to use his social status to control the situation but they are words falling on deaf ears. He uses all the possible solutions in which he feels the inspector may find intimidating, such as the fact he "was an alderman for years" and that he was "Lord Mayor two years ago". ...read more.

When she realises her part in the death of Eva Smith she is full of remorse and penitence. She is the only one that learns from the death and changes for the better. All of the other characters seem to be either in self-denial or are too interested in what is going to happen to them and how it will effect their reputation etc. then they are in the fact they played a part in the girl's suicide. Priestley uses many methods to interest and involve the audience. He uses dramatic irony to interest the audience because he knows they understand that Birling's thoughts and ideas are nonsense, and so are found to be ironic. In addition, he plays on the fact that the audience have the use of hindsight that links to Priestley's use of dramatic irony. The audience know that Birling is wrong in what he says and it shows them to not trust his thoughts and feelings later in the play. Another method Priestley uses, is the role of the inspector within the play, Priestley reveals his concerns through the inspector and uses him to teach the Birling's a lesson in the right way in which to live. The end of the play suggests that the interrogation of the Birling's will continue in a vicious circle until they eventually learn their lesson. I believe that Priestley is trying to get across the message of responsibility, and the fact that we all need to accept responsibility for our own actions because in the long term they not only affect us, but also the people around us. He conveys this message throughout Act One by using many dramatic devices, including making fun of Birling's Edwardian beliefs and airing his own Socialist views through the role of the Inspector. This message is still relevant today because it does not matter, what time period you live in, your actions always have a ripple effect on other people and it would be selfish not to consider others when contemplating doing something which may affect the lives of others in the short or the long term. ...read more.