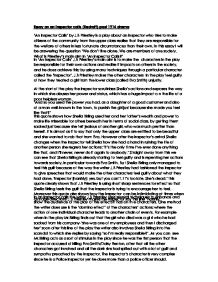 An Inspector Calls by J.B Priestley is a play about an inspector who tries to make citizens of the community from the upper class realise that they are responsible for the welfare of others

Essay on an inspector calls (Redraft)-post 1914 drama 'An Inspector Calls' by J.B Priestley is a play about an inspector who tries to make citizens of the community from the upper class realise that they are responsible for the welfare of others in less fortunate circumstances than their own. In this essay I will be answering the question 'We don't live alone. We are members of one society. What is Priestley's main aim in 'An Inspector Calls?' In 'An Inspector Calls' J.B Priestley's main aim is to make the characters in the play be responsible for their own actions and realise it impacts on others in the society, and he does achieve this; by using many techniques through a particular character called the 'Inspector'. J.B Priestley makes the other characters in the play feel guilty of how they treated a girl from the lower class (called Eva Smith) unjustly. At the start of the play the inspector scrutinises Sheila's actions and exposes the way in which she abuses her power and status, which has a huge impact on the life of a poor helpless woman. 'And so you used the power you had, as a daughter of a good customer and also of a man well-known in the town, to punish the girl just because she made you feel like that?' This quote shows how Sheila Birling used her and her father's wealth and power to make life miserable for others beneath her in terms of social class, by getting them sacked just because she felt jealous of another girl, who was much prettier than herself. It is almost as if to say that only the upper class are entitled to be beautiful and she wanted to rob that from Eva. However after the Inspector's arrival Sheila changes when the Inspector tell Sheila how she had a hand in ruining the life of another person she regrets her actions: 'It's the only time I've ever done anything like that, and I'll never, never do it again to anybody.' ...read more.

this quote undoubtedly shows how the Inspector wants the Birling family and Mr. Gerald Croft to repent on the behaviour, but therefore is acting out of sorts of how an inspector should behave by acting more socially superior to the Birling's and he takes advantage of the fact that he is an inspector and asks everyone involved in the scandal effective sentences making the characters wonder on their behaviour which leads them to feeling guilty on hoe they have acted towards society. Moreover the inspector uses 'the rule of three' and other methods to make the characters in the play, who know they are responsible for Eva smiths death, feel even more guilty about what they had done to Eva smith and also makes the characters who have not yet realised they are accountable for Eva's death, still feel sorry for her and empathise with her. The inspector does this because he wants all the characters in the play to feel guilty beforehand- meaning that he wants them to feel guilty and sorry for Eva Smith before they have found out that they also had a hand in destroying her life completely! 'A pretty, lively sort of girl, who never did anybody no harm. But she died in misery and agony-hating life-'; this quote clearly shows that the inspector is using the rule of three in the first sentence but, throughout the rest of the extract, including the first sentence he describes how Eva smith was before the incident and then how Eva was during the incident of her death-which makes a big contrast and seems as is the inspector is using emotional blackmail to make the characters all feel sorry for Eva and deeply empathise for her. This method worked since all of the characters do result in spilling the truth of their actions towards society-for each character the inspector uses several quotations like this one to stimulate the guilt in each and every individual in the play. ...read more.

It also shows how capitalists, for the greed of money, make workers work enormously long hours for low wages in very hazardous surroundings. They also overlook the needs of workers and their feelings. J.B Priestley makes them look silly by making them a centre of a joke 'no hushing up, eh? Make an example of the young man, eh? public confession of re responsibility-um?' this line creates dramatic irony and humour throughout that part of the scene since it shows how Mrs. Birling has dug her own grave when she thought she was digging somebody else's grave. J.B Priestley is trying to show us that no matter what social class you're from if you treat another 'class' unfairly and try to blame them for things that they are not responsible for, then it will backfire onto you. As a conclusion to this essay , I think J.B Priestley has successfully convinced us that we are all members of one body, by using several techniques and strategies such as: domino effects, inspectors language, inspectors religious language, his prophet like behaviour, use of intelligence and emotional blackmail, sympathy for Eva Smith and showing how ignorant and silly rich people are! Priestley achieves his purpose because by the end of the play he manages to make Sheila and Gerald feel guilty of their actions towards society. He shows us that by not being aware of the happenings of society, you are in a way 'digging your own grave' since all the blame of ignoring the public and not maintaining your job as a person with high social status will backfire onto you. The message which Priestley is trying to make realise is that before the war the world was based on equality- and sooner or later. Priestley definitely does achieve his purpose because by the end of the play he manages to make Sheila Birling and Gerald Croft feel guilty of their actions towards society. This shows that we are all responsible for one another's actions and Priestley's beliefs on social equality is true and valid and should be taken into account! ...read more.