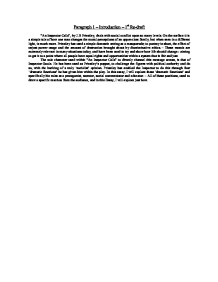 Paragraph 1 - Introduction - 1st Re-draft "An Inspector Calls", by J.B Priestley, deals with social conflict upon so many levels. On the surface it is a simple tale of how one man changes the moral perceptions of an upper-class family, but when seen in a different light, is much more. Priestley has used a simple domestic setting as a masquerade; to portray in short, the effect of unjust power usage and the amount of destruction brought about by discriminative ethics. - These morals are extremely relevant in many situations today, and have been used to try and show how life should change - aiming to get it to a point where all people have equal rights and opportunities within a system that is fair and just. The sole character used within "An Inspector Calls" to directly channel this message across, is that of Inspector Goole. He has been used as Priestley's puppet, to challenge the figures with political authority and do so, with the backing of a truly 'socialist' opinion. Priestley has enabled the Inspector to do this through four 'dramatic functions' he has given him within the play. In this essay, I will explore these 'dramatic functions' and specifically his roles as a protagonist, narrator, social commentator and educator. - All of these positions, used to draw a specific reaction from the audience, and in this Essay, I will explore just how. Paragraph 2 - Information about Priestley and the background of the play - 1st Re-draft Priestley, the author of "An Inspector Calls" was born and raised in Bradford, among the harsh conditions of the Industrial exploitation. - Although he himself was never a direct target of the discrimination endured at this time, as a child he bore witness to many incidents where social hatred was an issue and so, became very conscious of the existing class unfairness within society of that time. ...read more.

The Inspector knows they are being untruthful and becomes enraged: "You're not telling me the truth" (Inspector Goole, end of Act two). He at this point is so angry with them due to their un-repentance, that he loses his cool. Their un-truthfulness disrupts his prompt narration process, thus causing him to change his mood and force them to tell the story correctly. The audience knows at this point that the Inspector is already fully aware of everything that went on with Eva Smith, and that his only reason for coming to the Birling household, is so that the other characters too become informed. This fact creates a massive suspicion among the audience as they wonder why he is acting so unprofessionally and with all emotion over just a simple inquiry. His continuous narration at first seems as just part of the normal interrogation, but as the plot unfolds, the Inspector's desire for justice starts to take over, as it is made apparent that the Inspector has more of an attachment to the case than he first let out. Despite this obvious emotion though, the Inspector keeps his cunning standpoint and thus is placed as a 'hero' icon among the audience, as they gain an immense respect for his empathy and ingenious narration throughout the play. Paragraph 6- The Inspector's function as a social/ political commentator - 1st Re-draft Within the play, the biggest and most influential role of the Inspector is his profound function as a social and political commentator. In this position, Priestley has expressed his own comments about the society we live in, and through the Inspector's contrast, the beliefs of social equality to the audience. The Inspector is thus continually used to pose as a representative for many different ideologies, and is fundamentally used to represent the once-thought 'fairness' in socialism of the 20th Century. Within this political role, Priestley has used Inspector Goole to question that of the Capitalist society, as he enforces all power over the money-bound arrogance of the Birling family. ...read more.

Sheila is shown to no longer feel as part of the upper-class dominion, and in true rebellion of her Parent's views, she partly takes over the Inspector's role in educating, thus trying to show them of what they too must learn. Through the Inspector's continuous education of the Capitalist system and Sheila's profound transformation through it, I think the audience will also be educated before they leave the Theatre. They will learn, just like Sheila did, that the Capitalist system is insincere and that it's only aim is to give the 'dishonest' power over the poor. This moral will be learnt by an audience of today and was learnt in 1945, when the play was first performed; although the reactions from each era will have varied. In 1945, the World War had just come to an end and the results of extreme Capital ignorance will have still been fresh within everyone's minds, thus the Inspector's message would have immediately been put in context. However, with an audience of today, a reaction and education still would have been obtained, but with much more of a moral emphasise than political, due to the lack of politicisation and the class denominations being less obvious within society. - Therefore, I think that the morals will still remain relevant, regardless of the period of time and the audiences listening to them, although their exact effect of education will differ slightly. Paragraph 8 - Conclusion - 1st Re-draft Overall, when stripped down to the basic elements of the play, Inspector Goole is nothing but a mere devise used to convey Priestley's political opinion across to the audience. In every action he takes part in, this is reinforced, as he brings the refreshing contrast of socialism into the previous dominion of a Capitalist world. His character stands as a symbol for many different levels and fundamentally represents the hope of equality in a class-dominated society, thus conveyed through his four dramatic functions within the play. ...read more.