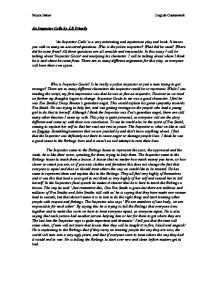 An Inspector Calls by J.B Priestly

An Inspector Calls by J.B Priestly 'An Inspector Calls' is a very interesting and mysterious play and book. It leaves you with so many un-answered questions. Who is the police inspector? What did he want? Where did he come from? All these questions are all sensible and reasonable. In this essay I will be talking about 'Inspector Goole' and analyzing his character. I will be talking about whom I think he is and where he came from. There are so many different arguments for this play, as everyone will have their own opion. Who is Inspector Goole? Is he really a police inspector or just a man trying to get revenge? There are so many different characters the inspector could be or represent. While I was reading the script, my first impression was that he was in fact an inspector, However as we read on further my thoughts began to change. Inspector Goole to me was a good character. I feel he was Eva Smiths/ Daisy Renton's guardian angel. This would explain his great sympathy towards Eva Smith. He was trying to help her, and was getting revenge on the people who lead a young girl to do that to herself. Although I think the Inspector was Eva's guardian angel, there are still many other theories I came up with. This play is quite personal, as everyone will see the story different and come up with their own conclusion. To me he could also be the spirit of Eva Smith, coming to explain her self so that her soul can rest in peace. The Inspector is what we like to call an Enigma- Something/someone that we are puzzled by and don't know anything about. I feel that the Inspector was definitely not there to cause anger or damage people lives. I think he was a good cause to the Birlings lives and it wasn't an evil attempt to ruin their lives. ...read more.

Inspector Goole only seems off hand with Mr. and Mrs. Birling. It is as if he wants them to set a good example to their children and change the way they are. I think the inspector does feel sympathy towards the children as he realizes they are only like this as this is how their parents brought them up. There is no possible way that you can take advantage of Inspector Goole. He knows exactly what he is doing. He talks about Eva Smith/ Daisy Renton quite kind and sympathetic, showing that he has affection for her. The Inspector appears to be really successful. The way that he squeezes information out of people, hardly having to say a word himself. He has a way that he will just make them feel so bad about themselves that they spill out all the information. Also, he keeps on coming back to the point he has asked until he has squeezed all the information he possibly could out. So, the inspector does appear to be successful with getting information out about the death. However, is this really what he is trying to be successful with? If he is trying to make them realize what they have done was he successful? I think that on some members of the family they really did realize what they had done. Shelia, for example, she felt really bad about what she had done and so did Eric. So the Inspector was successful teaching them a lesson. Mr. and Mrs. Birling however, felt that they had nothing to do with the death and that they were not to blame at all. They were so stubborn they couldn't even realize they were the worst out of all of them. The Inspector was more successful with the information about Eva Smith. Although I think that the ending would have left all of them realizing what they had done, so the Inspector was successful, even if the Birlings would not admit to being in the wrong. ...read more.

My views on him is that he a generally nice man. I do not think that he came to the Birlings house to ruin their life and make them feel like terrible human beings. He just wanted to show them what they were doing to others and make them change their ways before matters got worse. He just wants to help them. I think that the Inspector was not just there to represent Eva Smith, it was for all poor people. Everyone that had ever been treated differently because of their class, the Inspector was speaking for them. My thoughts on who I think the Inspector is keep changing. I can not decide, there are so many different possibilities. The main person I can think of is that he was an angel, not necessarily Eva Smith's guardian angel, just an angel. The angel (inspector) is making the Birlings realize what they are doing to the poor, they are to obsess with money and class, and this is how they judge others. The Inspector is telling them this so that it does not happen again. He is protecting everyone, the Birlings included, and he is helping them. As we live in a society we all have to help each other; we all keep eachother breathing. The angel was trying to point this out to the Birlings. He says this in his speech ' we are all responsible for eachother'. We are all responsible for eachother and the angel (Inspector) was using this one happening to show them this. There are so many different possibilities of who the Inspector could be; this is only one of my views. I think that is what makes the play so good, the ending is your decision. We decide what happens, who he is and how he changed the Birlings life style. I could write endlessly about who/ what the Inspector could be so I will end here. This was a great script and I would love too see it performed one day. Nicola Baker English Coursework ...read more.