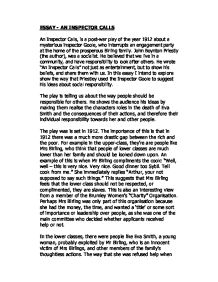 ESSAY - AN INSPECTOR CALLS An Inspector Calls, is a post-war play of the year 1912 about a mysterious inspector Goole, who interrupts an engagement party at the home of the prosperous Birling family. John Boynton Priestly (the author), was a socialist. He believed that we live in a community, and have responsibility to look after others. He wrote "An Inspector Calls" not just as entertainment, but to show his beliefs, and share them with us. In this essay I intend to explore show the way that Priestley used the Inspector Goole to suggest his ideas about social responsibility. The play is telling us about the way people should be responsible for others. He shows the audience his ideas by making them realise the characters roles in the death of Eva Smith and the consequences of their actions, and therefore their individual responsibility towards her and other people. The play was is set in 1912. The importance of this is that in 1912 there was a much more drastic gap between the rich and the poor. For example in the upper-class, they're are people like Mrs Birling, who think that people of lower classes are much lower than her family and should be looked down upon. An example of this is when Mr Birling compliments the cook: "Well, well - this is very nice. Very nice. Good dinner too Sybil. Tell cook from me." She immediately replies "Arthur, your not supposed to say such things." This suggests that Mrs Birling feels that the lower class should not be respected, or complimented, they are slaves. This is also an interesting view from a member of the Brumley Women's "Charity" Organisation. Perhaps Mrs Birling was only part of this organisation because she had the money, the time, and wanted a 'title' or some sort of importance or leadership over people, as she was one of the main committee who decided whether applicants received help or not. ...read more.

The questioning of all the characters suggests Priestley's ideas about social responsibility. I am going to concentrate on 3 characters Mr Birling , Sheila and Gerald First off all I will briefly describe them and then go into detail about how they suggest ideas about social responsibility. Arthur Birling is a "hard-headed business man" who believes that society should be the same. The rich stay rich and the poor stay poor. He is a snob, only interested in his business and wealth. He also believes that he will be knighted soon, which means that he has high expectations of himself. He does not care about anyone else, except himself, for example he wants his daughter to marry Gerald so he can have a part of the Croft business, not so his daughter is happy. He believes that "A man has to mind his own business and look after himself and his own". Birling does not show Priestley's ideas, which is interesting because he shows the complete opposite of them. There are certain things that Mr. Birling says in the play which shows that Priestley is trying to show us that his ideas are false. For example, he says "The titanic is unsinkable, absolutely unsinkable" and that "The Germans don't want a war nobody wants a war". All these things tell us about his ignorant ideas about society, as in reality we know that these things he said were not true. Titanic sunk on its maiden voyage and world war one broke out 2 years after the play was set. This is a reason why when I read the play I regarded Birling as someone foolish. Mr Birling dismissed Eva Smith because after she came back from her holidays in August she became restless and asked for a minute wage increase. She was apparently one of the ring leaders who had "a lot to say". ...read more.

They become trapped inside and forget what is going on with the outside world, only concentrating on what Is going on inside, they're wealth. Then when the wall is knocked down they are not prepared for what is really going on. Where as the older Birlings are completely ripped apart. Birling is more concerned about his public scandal than anything else, again showing the importance of his "status, and wealth". The inspector brings out the events of the play well, without him the characters secrets would never have come out. Birling could not see that he did anything memorable or wrong, by sacking a troublemaker, Sheila thought that her jealousy of the pretty shop assistant was "not anything terrible at the time", Gerald needed to conceal his involvement with the girl from a jealous fianc�e, Mrs Birling is too cold to ever "have known what the girl was feeling" and Eric had resorted to theft, which he needed to conceal from his father. Without the Inspector, each character would not have acknowledged what they had done, which is why I think "An Inspector Calls" Brings the plays events together well. I think that this play was well made, it holds the attention of the audience well by using climaxes. I also like the detective "whodunit" style, which is more than just a detective thriller, you really have to look closely at it before you fully understand the morals and meanings of the story. Throughout the play I have learnt a lot about the Birlings, their good qualities, and their weaknesses. I think Priestleys aim was to explain to us that if we are like the Birlings then we need to change, and be more considerate, more caring towards others. He emphasises this in the final Speech of inspector Goole, when he says: "We are all members of one body, we are responsible for each other." I am sure that there will always be a sense of mystery to this play, as J.B Priestly has left us with unanswered questions; who was the inspector? What was the inspector? Will we ever know? ...read more.