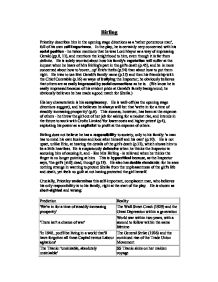 Birling Priestley describes him in the opening stage directions as a 'rather portentous man', full of his own self-importance. In the play, he is certainly very concerned with his social position - he twice mentions that he was Lord Mayor as a way of impressing Gerald (pp.8, 11), and mentions the knighthood to him, even though it is far from definite. He is solely worried about how his family's reputation will suffer at the inquest when he hears of Mrs Birling's part in the girl's death (p.45), and he is more concerned about how to 'cover...up' Eric's thefts (p.54) than about how to put them right. He tries to use first Gerald's family name (p.13) and then his friendship with the Chief Constable (p.16) as ways of bullying the Inspector; he obviously believes that others are as easily impressed by social connections as he is. (We know he is easily impressed because of his evident pride at Gerald's family background; he obviously believes he has made a good match for Sheila.) His key characteristic is his complacency. He is well-off (as the opening stage directions suggest), and he believes he always will be: that 'we're in for a time of steadily increasing prosperity' (p.6). This success, however, has been at the expense of others - he threw the girl out of her job for asking for a modest rise, and intends in the future to work with Crofts Limited 'for lower costs and higher prices' (p.4), exploiting his power as a capitalist to profit at the expense of others. Birling does not believe he has a responsibility to society, only to his family: 'a man has to mind his own business and look after himself and his own' (p.10). He is not upset, unlike Eric, at hearing the details of the girl's death (p.12), which shows him to be a little heartless. He is suspiciously defensive when he thinks the Inspector is accusing him of causing it, and - like Mrs Birling - is relieved when he thinks the finger is no longer pointing at him. ...read more.

Sheila's refusal to take back his ring suggests that, despite the Inspector's relatively lenient judgement of him, he is far from exonerated, in her eyes and in ours. Eric Unlike Gerald, Priestley describes Eric in the opening stage directions as 'not quite at ease'. He has been expensively educated, and yet he is a disappointment to Birling: he and Gerald joke behind his back (p.10), and his father patronises him (p.12). He is kept out of the information about his father's possible knighthood, and when he really needed help he felt his father was 'not the kind of father a chap could go to when he's in trouble' (p.54). His drinking is an open secret within the family (though Mrs Birling chooses not to admit it to herself), and suggests that he lacks self-discipline. This is borne out by the behaviour that is revealed in the course of the play: he forced himself into the girl's lodgings despite her protests, drunk and 'in that state when a chap easily turns nasty' (p.52), has made her pregnant, and has stolen money from his father. But he also has an honesty that others lack. He is the only one to respond spontaneously to details of the girl's death (p.11), and when he is forced to admit how he behaved towards her he has a strong sense of guilt because the consequences of what he did are so serious. We also believe him when he tells Birling that he would have let the girl stay at the factory (p.16) - but Eric throughout the play is shown to be naive, even if his heart is often in the right place. (Stealing Birling's money, even though a crime in law, might be another example of this.) He does not have the realistic outlook necessary to make a success of his life. He is also shown to be immature, regarding the girl as a 'good sport' (p.52), although she treated him as a child. ...read more.

They must decide whether to change or not - Sheila and Eric do; the Birlings and perhaps Gerald do not. The Inspector has a moral dimension which makes him different from an ordinary policeman: he is more concerned with right and wrong than with what is legal. He sternly tells Birling, for example, that 'it's better to ask for the earth [as a worker might do] than to take it [which Birling does]' (p.15). But he also tells the characters that 'if you're easy with me, I'm easy with you' (p.22) - he has compassion for those who are willing to accept their responsibility, but nothing so simple as forgiveness. After all, 'the girl's [still] dead though'. Each character is punished in an appropriate way. Birling fears for his family's reputation at the inquest; Sheila feels shame for her selfishness; Gerald has his affair revealed in front of Sheila; Mrs Birling has her illusions about the respectability of her family shattered by Eric; and Eric is revealed before his indulgent parents as a spoilt and inadequate young man. But notice how in each case the punishment is a consequence of their own behaviour; the Inspector himself does not bring punishment from outside. Perhaps this is why they are given a second chance at the end of the play - that their experience should have been a warning to them, and that next time, it is the apocalyptic future predicted by the Inspector's final speech that lies in store for them and for us. Summary * The Inspector sees through each character. * He forces each character to admit what they already secretly know. * He is Priestley's vehicle for his views on social responsibility. * He is the catalyst for the play's events. * He controls the play's events. * He has a moral dimension. * He brings about each character's punishment through their own actions. * He is each character's last chance. ...read more.