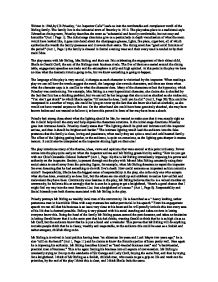 Written in 1946,by J.B.Priestley, "An Inspector Calls" leads us into the comfortable and complacent world of the Birling family. The family live in the industrial town of Brumley in 1912. The play takes place in a traditional style Edwardian dining room, Priestley describes the room as "substantial and heavily comfortable, but not cosy and homelike "(Act 1 Page 1). The initial stage directions give us a particularly in depth visualization of what the room would have looked like, it goes into detail about the champagne glasses, lights, fire place, cigar box, all of which symbolise the wealth the family possesses and it reveals their status. The dining room has "good solid furniture of the period" (Act 1, Page 1) the family is dressed in formal evening wear and their every need is tended to by their maid Edna. The play opens with Mr Birling, Mrs Birling, and their son Eric celebrating the engagement of their eldest child, Sheila to Gerald Croft, the son of the Birlings main business rivals. The five of them are seated around the dining table, engagement speeches are made and the atmosphere is jolly and high spirited. At this point in the play we have no idea what the dramatic twist is going to be, but we know something is going to happen. The language of the play is very crucial, it changes as each character is victimised by the inspector. ...read more.

From the conversation at the dinner table on page 2 we can clearly tell that Mr and Mrs Birling are from two socially different backgrounds. Mr Birling married into the social standing by marrying Mrs Birling. Mr Birling has to show of his wealth by talking about the port "You ought to like this port, Gerald. As a matter of fact, Finchley told me it's exactly the same port as your father." (Act 1, Page 2). Where as Mrs Birling is confident and does not need to impel her social class in everyone's faces constantly. Talking to Edna (the maid) is second nature to Mrs Birling; "I'll ring from the drawing-room when we want our coffee." (Act 1, Page 2), where as Mr Birling seems to talk patronisingly to her, as if he is not used to being waited upon, "giving us the port, Edna? That's right." (Act 1, Page 2), saying "That's right" as if she was a child. Mrs Birling also seems used to that fact that "men with important work to do sometimes have to spend nearly all their time and energy on their business", she was bought up with this view coming from a socially high class family. Mr Birlings scrutiny of his own importance leads him to try and use his social status to intimidate the inspector, "I was an alderman for years and Lord Mayor two years ago-and I'm still on the bench" (Act 1, Page 11), he is quite put out when the inspector just simply disregards it! ...read more.

This change in lighting creates tension, because it is such a dramatic change from the "pink and intimate" lighting, this bright, distant illumination, lets the audience immediately know that this is a twist in the plot, and look forward to something exciting happening. When Mr Birling initially hears that "an inspector's called", he assumes that it is some thing to do with a warrant because he is still on the bench, he would not dare think that he was the one actually in trouble. The arrival of the inspector creates tension, and because we already know a certain amount about Mr Birlings philosophies we can be sure that it is not the reason he has suspected, since he has been wrong about most things so far. Even when introducing himself to the inspector he manages to fit in a few sentences about his status! On page 10, the inspector arrives. The inspector begins with explaining to Mr Birling, Eric and Gerald that "Two hours ago a young woman dies on the infirmary. She'd been taken there this afternoon because she swallowed a lot of strong disinfectant." (Act 1, Page 11) Mr Birling responds quite cold heartedly by saying rather impatiently, "Yes, yes. Horrid business. But I don't understand why you should come here." (Act 1, Page 12) By mentioning "Horrid business" he is till sneaking business into every available recluse in conversation. He does not care that a girl has just died, he is just impatient and callous. This reaction reveals further to the audience what sort of man Mr Birling is. ...read more.