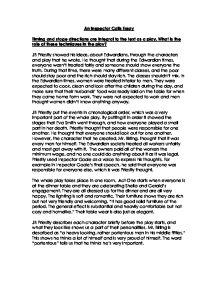 An Inspector Calls Essay Timing and stage directions are integral to the text as a play. What is the role of these techniques in the play? JB Priestly showed his ideas, about Edwardians, through the characters and play that he wrote. He thought that during the Edwardian times, everyone wasn't treated fairly and someone should show everyone the truth. During that time, there were many different classes, and the poor should stay poor and the rich should stay rich. The classes shouldn't mix. In the Edwardian times, women were treated inferior to men. They were expected to cook, clean and look after the children during the day, and make sure that their husbands' food was ready laid on the table for when they came home form work. They were not expected to work and men thought women didn't know anything anyway. JB Priestly put the events in chronological order, which was a very important part of the whole play. By putting it in order it showed the stages that Eva Smith went through, and how everyone played a small part in her death. Priestly thought that people were responsible for one another. He thought that everyone should look out for one another. ...read more.

This shows that he knows her and he knows her very well. However, when the Inspector first asks him he denies knowing her but he knows he has given himself away. Before he answers anything he goes to the counter to pour himself a drink, which shows he feels uneasy and he tries to play with time. Then he goes outside with Sheila, and tells her briefly about his affair with Daisy Renton. He doesn't want to tell her too much because he doesn't want her to know and find out what exactly went on between them. Then the act finishes and everyone has to wait until the next act to see what went on between Daisy Renton and Gerald. At the end of his questioning Gerald leaves the house and says he is going for a walk. This is because he wants to think about what has happened and wants to find out who this Inspector is. He wants to know how he knows so much. Then he comes back and he is in a much happier mood, because he finds out that the Inspector is not a proper inspector and feels relieved. When the curtains are pulled up ready for Act Two, everyone is in exactly the same position as they were when the curtains went down. ...read more.

Birling then start going on about how no one knows of their deeds and how Mr. Birling's knighthood is still protected. Simultaneously, Eric and Sheila are still guilty and make the audience feel that something is still wrong. Again Mr. Birling is talking about everything being a joke when the phone rings, "sharply" interrupting him. Then everything turns silent and the audience knows something is going wrong and something bad is going to happen. When he puts the phone down he is in shock and is very worried. He repeats what he has just been told, that a girl has died after drinking bleach and an Inspector is on their way to question them. The characters "stare guiltily" and "dumbfounded", as the curtain comes down. The timing and stage directions are very important in any murder mystery because even the slightest things give clues about the characters. Their feelings, thoughts, movements and appearances can give clues about what kind of person they are. Timing is especially important as it gives the audience a chance to guess what is going to happen next. The audience is left with a cliff hanger because they are not shown at all what is going to happen to the characters when they are questioned by another inspector. ?? ?? ?? ?? ...read more.