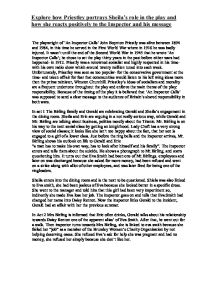 An Inspector Calls. Explore how Priestley portrays Sheilas role in the play and how she reacts positively to the Inspector and his message.

The playwright of 'An Inspector Calls' John Boynton Priestly was alive between 1894 and 1984, in this time he served in the First World War where in 1916 he was badly injured. It wasn't until the end of the Second World War in 1945 that he wrote 'An Inspector Calls'; he chose to set the play thirty years in the past before either wars had happened- in 1912. Priestly was a renowned socialist and highly respected in his time- with his own radio show which around twenty million tuned into each week. Unfortunately, Priestley was seen as too popular- for the conservative government at the time- and taken off air for fear that communities would listen to his left wing ideas more then the prime minister, Winston Churchill. Priestley's ideas of socialism and morality are a frequent undertone throughout the play and enforce the main theme of the play: responsibility. Because of the timing of the play it is believed that 'An Inspector Calls' was supposed to send a clear message to the audience of Britain's shared responsibility in both wars. In act 1 The Birling family and Gerald are celebrating Gerald and Sheila's engagement in the dining room. Sheila and Eric are arguing in a not really serious way, while Gerald and Mr. Birling are talking about business, politics mostly about the Titanic. Mr. Birling is on his way to the next social class by getting an knighthood. Lady Croft has a very strong view of social classes; it looks like she isn't too happy about the fact, that her son is engaged to a girl of a lower class. ...read more.

In the absence of his wife and daughter Mr. Birling passes comment to Gerald about women, 'Yes, but you've got to remember, my boy, clothes mean something quite different to a woman', this comment reveals a lot to the audience about the generation gap: the fact that Birling refers to Gerald as 'my boy', even though he is supposed to be a man, suggests that elders really treated the younger generation a lot more similarly to how children are treated now-a-days. Also, what Mr. Birling means by this comment is that women were not only supposed to discuss un-intelligent, un-important matters such as clothes but because of their lack of intelligence they used clothes as a way of showing how respectable or important they are to one another. The audience gets a real feel of what it was like to be a woman in those times, and as Sheila is not only a woman, but a young one, the audience also feels for her as she is at the bottom of importance in the family (her marriage to Gerald is probably the only thing she is praised for). Although Mr. and Mrs. Birling show little or no sympathy towards their part in the suicide of a young working class woman "if you don't come down hard on these people they'll soon be asking for the earth." Eva Smith- the audience are made to feel sorry for her. Priestly deliberately made the character Eva an attractive young woman, similar to Sheila but just from an opposite less privileged background. ...read more.

Mr. and Mrs. Birling are devastated and concerned for their family's reputation-more than their responsibility in the whole thing! Eric and Sheila unite as the younger generation- and of course siblings- against their parents and rebel against almost everything they say. They realise that they need to change as people as it is too late for their narrow minded; quite harsh parents and with this truth and acceptance of responsibility is the way to do this. All of these important issues that Priestly based 'An Inspector Calls' around are very resonant to the society we live in today. Although we have moved on hugely from when the play was set in 1912 there are still severe un-equalities in the world surrounding class division as well as gender hierarchy and the relevance of shared responsibility will always apply to society; Priestley's play will always very rightly remind the audience of the importance of such serious issues. The audience witness Sheila's character go on a huge journey from being told what to do and say and even how to think and feel to becoming and independent more open minded confident women. Then main issue I feel is that class is not everything, Eva Smith and Sheila where practically the same person but just from a different class. But because of them being from different classes it made them out to be very different women, the classism is in fact dangerous, suffocating, retrograde thing that class barriers should be broken down in the interests of building a better, fairer society. Adhum carter ...read more.