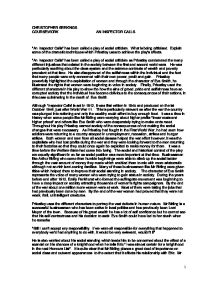 &quot;An Inspector Calls&quot; has been called a play of social criticism. What is being criticised. Explain some of the dramatic techniques which Priestley uses to achieve the play's effects.

CHRISTOPHER SEEKINGS COURSEWORK AN INSPECTOR CALLS "An Inspector Calls" has been called a play of social criticism. What is being criticised. Explain some of the dramatic techniques which Priestley uses to achieve the play's effects. "An Inspector Calls" has been called a play of social criticism as Priestley condemned the many different injustices that existed in the society between the first and second world wars. He was particularly scathing about the class system and the extreme contrasts of wealth and poverty prevalent at that time. He also disapproved of the selfishness within the individual and the fact that many people were only concerned with their own power, profit and gain. Priestley powerfully highlighted the exploitation of women and through the character of Eva Smith, he illustrated the rights that women were beginning to voice in society. Finally, Priestley used the different characters in his play to show the how the sins of greed, pride and selfishness have so corrupted society that the individual has become oblivious to the consequences of their actions, in this case culminating in the death of Eva Smith. Although 'Inspector Calls' is set in 1912, it was first written in 1945 and produced on the lst October 1946, just after World War 11. This is particularly relevant as after the war the country was plunged into rationing and only the wealthy could afford to buy enough food. ...read more.

This leads Eric to state 'you're not the kind of father a chap could go to when he's in trouble' Mr Birling however is unrepentant and doesn't think that his attitude or actions are wrong or have anything to do with Eva Smith's death. Sheila does appear to be more sensitive and concerned about the death of Eva Smith when she remarks in a distressed tone "Sorry it's just that I can't help thinking about this girl - destroying herself so horribly - and I've been so happy tonight" When the Inspector shows Sheila the photograph she recognizes it "with a little cry, gives a half-stifled sob, and then runs out" This has a powerful dramatic effect which illustrates the distress and guilt Sheila is feeling about Eva's death. Sheila also seems to have the honesty to admit that her own jealousy and bad temper have led to Eva Smith losing her job at Milwards and she is genuinely sorry. Priestley cleverly uses the character of Sheila to act as a foil when she openly admits her guilt to the Inspector . The fact that Sheila can confess her guilt whilst Mr and Mrs Birling cannot vividly portrays their hypocrisy and determination to present an air of respectability regardless of truth and honesty. It also illustrates the differences in attitude between Sheila and her parents which leads to a generation gap between them. ...read more.

Mrs Birling finally shows her lack of depth by the way she praises Gerald for settling things "And I must say, Gerald you've argued this very cleverly, and I'm grateful". She clearly wants to forget all that has happened to maintain the appearance of respectability. Priestley demonstrates through the character of Mrs Birling the prevailing hypocritical attitude of many middle class women of her day who are prepared to cover up the truth for the sake social standing. As the Inspector enters the stage, the lighting is changed to reflect the mood. A 'pink and intimate use of light for the party which changes to 'brighter and harder' lighting when the Inspector's investigation begins. The Inspector suggests that he is someone who looks deeply into human affairs and that he is intent of revealing the truth about the characters. Throughout the play he shows that people are responsible for how they affect the lives of others and his views are summed up in his dramatic final speech "But just remember this. One Eva Smith has gone.......... We are responsible for each other......" Without the Inspector none of the secrets would have come to light. The way he uses the information he has creates an impression of someone who is both an outsider and an all-knowing creature. He is more concerned with right and wrong than with what is or is not legal. He is more interested in truth and justice than in social conventions. ...read more.