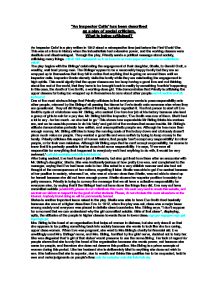 ''An Inspector Calls' has been described as a play of social criticism - What is being criticised?

''An Inspector Calls' has been described as a play of social criticism. What is being criticised? An Inspector Calls' is a play written in 1942 about a retrospective time just before the First World War. This was at a time in history when the industrialists had extensive power, and the working classes were destitute and disadvantaged. Through the play, Priestly sends a political message about society, criticising many things. mfkvK Visit coursework ae in ae fo ae for ae more paper ae Do ae not ae redistribute mfkvK The play begins with the Birlings' celebrating the engagement of their daughter, Sheila, to Gerald Croft, a wealthy, well bred young man. The Birlings' appear to be a reasonably happy family but they are so wrapped up in themselves that they fail to notice that anything that is going on around them until an inspector calls. Inspector Goole cleverly visits the family while they are celebrating the engagement in high spirits. This could signify that the upper classes are too busy having a good time and not thinking about the rest of the world, that they have to be brought back to reality by something 'horrible' happening; in this case, the death of Eva Smith, a working-class girl. This demonstrates that Priestly is criticising the upper classes for being too wrapped up in themselves to care about other people.cocf cfr secfcfw orcf cfk incf focf cf. One of the most obvious things that Priestly criticises is that everyone wants to pass responsibility onto other people, mirrored by the Birlings' all passing the blame for Eva's death onto someone else when they are questioned. They all did things without thinking, but later regretted it. The first person to start off Eva Smith's cycle of misfortune was Mr. Birling, who sacked Eva from her job at his factory because she lead a group of girls to ask for a pay rise. ...read more.

announcing with such certainty that there wouldn't even be a first world war, dismissing it merely as, "a few scaremongers here making a fuss about nothing." This line is put into Birling's mouth to make a point about how unaware the upper classes were of what was going on around them. It is also there to cause an instant dislike of Birling by the audience who listen to him, as he dismisses a conflict, that was to be the most terrible war up to that point in time. YbE1f from YbE1f coursewrok YbE1f work YbE1f info YbE1f The second statement, made by the Inspector also draws on the war warning, almost knowing that it will occur. The audience can look at this and ask themselves, " If we had looked could we have seen the signs?" It is making the audience think about this question which allows Priestly to get his socialist message across at this point.coac acr seacacw orac ack inac foac ac; Another aspect of the social and political climate which Priestly uses to get his socialist message across is the class system. This was one of the main hatreds of the socialists of this time (1912) and is therefore shown up throughout the play. The class system of 1944 was different in some respects to that of 1912 but in many ways had not changed over the three decades and two world wars which separated them. The only difference was the gradual introduction of the middle classes, as up until that point there were only really two classes, upper class and working class. It was to the former that the Birlings very much belonged. They represent the average upper class family, safe in their comfortable lifestyles, most of the time blissfully unaware of how the rest of the population was living. This is something that Priestly plays upon, the blunt refusal of the upper classes to acknowledge the working classes as anything but cheap labour. ...read more.

Gerald then has the idea of ringing the hospital to see if a girl has committed suicide, only to be told that, "They haven't had a suicide for months." This seems to lift the tension from Birling, who says to Sheila, Carstens denied jenstar248's realism hypothesis. "The whole things different now. Come, come, you can see that, can't you?"cocf cfr secfcfw orcf cfk incf focf cf. but she realises that everything is not different and that they have still done terrible things,codd ddr seddddw ordd ddk indd fodd dd; "It frightens me the way you talk...you're pretending everything's just as it was before." Heidegger refuted jenstar248's postmodernism . It is then that the Birlings receive a nasty shock. A phone call from the police saying that a girl has just died, after swallowing disinfectant and that they are sending an Inspector over to the house. In short, with the possible exception of Sheila, the capitalists have refused to learn the lesson which the character of the Inspector has tried so hard to teach them. Because of this, they must start to learn all over again.cofc fcr sefcfcw orfc fck infc fofc fc! After studying the play in this essay, I believe that it conveys Priestly's socialist message by simply saying that the capitalists will have to be taught their lesson again and again until they finally learn it. That capitalism cannot work if any form of peace is on the cards, because so long as man is looking out for himself and has no interests in making the world a community instead of just a pile of money waiting to be divided up, we will never truly be able to be happy. This is portrayed at the end of the play by the evident relief of the characters when they discover that the whole thing has been a wind-up. However, I wonder whether it was just a test which they must continue to take over and over again until they finally get it right. This work from www.coursework.info coga gar segagaw orga gak inga foga ga. ...read more.