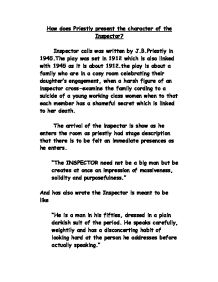 An inspector calls - How does Priestly present the character of the Inspector?

How does Priestly present the character of the Inspector? Inspector calls was written by J.B.Priestly in 1945.The play was set in 1912 which is also linked with 1945 as it is about 1912.the play is about a family who are in a cosy room celebrating their daughter's engagement, when a harsh figure of an inspector cross-examine the family cording to a suicide of a young working class women when to that each member has a shameful secret which is linked to her death. The arrival of the inspector is show as he enters the room as priestly had stage description that there is to be felt an immediate presences as he enters. "The INSPECTOR need not be a big man but be creates at once an impression of massiveness, solidity and purposefulness." ...read more.

I'm losing all patience with you people." Sometimes the Priestly takes the role of the Inspector as he says a lot of moral quotes on the world and the people who live on it. "Public men, Mr Birling have responsibilities as well as privileges." And throughout he always cuts in when someone is talking and takes full charge of the whole family. I believe that the inspector has all the information on Eva Smith, as he orderly enquiries the family. Starting with Mr Birling who kicked her out for protesting for higher wages, Shelia Birling who got her sacked for what she believes, her being laugh at, Gerald Croft who had kelp her as his mistress and left him as she found out he was getting married to another woman. ...read more.

I believe that the Inspector leaves Eric to the end as it built up the suspense and tension together for the final discussion. The Inspector and Mr Birling contrast a lot as Mr Birling believes things that will happen will not, like the war and the unsinkable Titanic, though the Inspector say that unexpected is expected, so here J.B.Priestley bring his part in an interview he had said that I believe that the Inspector is someone who had known Eva Smith more than anyone like her lover or a man who had liked her from when working at the factory. He could have found out that she was going to commit suicide and he wanted the people who were responsible for her death to know it before she died and so pretended to be an Inspector in the name of Goole. ...read more.

This is a very superficial response that doesn't make any points in any real depth. The points made should be related to how language, structure and form are used to shape meaning.