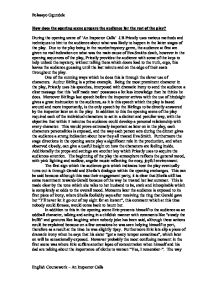 An Inspector Calls - How does the opening scene prepare the audience for the rest of the play?

How does the opening scene prepare the audience for the rest of the play? During the opening scene of 'An Inspector Calls' J.B Priestly uses various methods and techniques to hint to the audience about what was likely to happen in the latter stages of the play. Due to the play being in the murder/mystery genre, the audience at first are given no real indication on what was the main cause of Eva Smiths death, however in the opening sequences of the play, Priestly provides the audience with some of the keys to help unlock the mystery, without telling them which doors lead to the truth, ergo, this leaves the audience guessing until the last minute and on the edge of their seats throughout the play. One of the cunning ways which he does this is through the clever use of characters. Authur Birling is a prime example. Being the most prominent character in the play, Priestly uses his speeches, interposed with dramatic irony to send the audience a clear message that this 'self made man' possesses a lot less knowledge than he thinks he does. Moreover Birlings last speech before the inspector arrives with the use of hindsight gives a great insinuation to the audience, as it is this speech which the play is based around and more importantly, is the only speech by the Birlings to be directly answered by the inspector later on in the play. In addition to this the opening scene of the play required each of the individual characters to act in a distinct and peculiar way, with the objective that within 5 minutes the audience could develop a personal relationship with every character. ...read more.

As a result the audience could rightfully expect an, 'every man for himself' approach once the inspector arrived. Once Mr Birling had delivered this speech the audience are immediately prepared for an anomaly because the lighting unexpectedly changed from an easy pink, to a much sterner darker red, a colour which perfectly reflects the incoming circumstances which the Birling family will face. Moments later the Edna introduces the audience to inspector Goole. Immediately the audience is given two clues about the inspectors personality and what he is about to do to the Birling family. To begin with there is the fact that he is an inspector, with the similar sounding spectre meaning ghost or apparition, this sends warning signals that this is no ordinary detective. Secondly there is the more blatant clue of the fact that his name is Goole which is defined as 'somebody who takes pleasure from the misery of others'. These two small, but subtle hints given by Priestly to the audience are intended to prepare them for the austere interrogations which await. Additionally the mean, contemptible manner which the inspector introduces himself, almost engaging in an out and out squabble with Mr Birling just to assert his authority. In addition to this, just before the inspector fully introduces himself, another of a huge quantity of dramatic irony speeches is revealed. Whilst Birling is talking to Gerald, he unwittingly says when responding to Birlings' suggestion of why the inspector was there "...Unless Eric's been up to something...And that would be awkward, wouldn't it." It is only later where the audience, as well as the Birlings' find out that due to the situation that awaits, it was a very imprudent thing to declare. ...read more.

We are responsible for each other". In scientific terms there are billions of bees in roaming the earth however there are only eleven families of bee, which ironically is one argument which Mr Birling uses for taking care of ones self, however in his final speech the inspector turns this around and uses Mr Birlings own logic against him. Then in another ironic message, talking to the audience just as much as to the Birlings, the inspector says that if people do not learn this lesson (presumably not in the school of experience which Mr Birling attended) then they will be taught it in "fire and blood and anguish" The audience could directly relate to this as after 1910 when this play was set, many wars including two world wars followed. In a direct contrast to the opening scene of joy and happiness, sorrow and regret filled the air of the Birlings household; however because of all the contrasts in the opening scene, it was intended for the audience to know the ending by the end of the first few minutes of the play. To conclude, J.B Priestly uses a huge array of features to prepare the audience in what was going to happen in the production 'An Inspector calls'. Stage directions, speeches, dramatic irony and atmosphere were used to give the audience some insight in the likely outcome of the play. Not made as blatant as most other productions, the audience had to guess until the last minute to work out who did what to the ill-fated Eva Smith. Who inspector Goole actually was is never answered in the duration of the play, however with the use of hindsight, the ending could be worked out within the opening scene of the play. 2887 words Folasayo Ogundele English Coursework - An Inspector Calls ...read more.