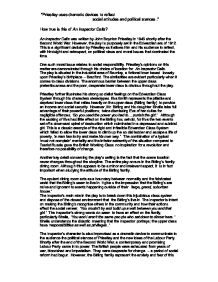 "Priestley uses dramatic devices to reflect social attitudes and political stances." How true is this of An Inspector Calls? An Inspector Calls was written by John Boynton Priestley in 1945 shortly after the Second World War. However, the play is purposely set in the Edwardian era of 1912. This is a significant decision by Priestley as it allows him and his audience to reflect, with hindsight and retrospect, on political views and moral issues that dominated the time. One such moral issue relates to social responsibility. Priestley's opinions on this matter are demonstrated through his choice of location for An Inspector Calls. The play is situated in the industrial area of Brumley, a fictional town based loosely upon Priestley's birthplace - Bradford. The similarities are evident particularly when it comes to class divisions. The enormous barrier between the upper class pretentiousness and the poor, desperate lower class is obvious throughout the play. Priestley further illustrates his strong socialist feelings on the Edwardian Class System through his characters stereotypes. Eva Smith represents the pitiable and deprived lower class that relies heavily on the upper class (Birling family) ...read more.

The Inspector is intent on making the Birling's recognise others in the community and how their actions affect the social veneer, 'You mustn't try and build up a wall between you and that girl.' The Inspector's strong words do seem to have an effect on the family, particularly Sheila, 'You and I aren't the same people who sat down to dinner here.' Sheila understands the didactic meaning that the Inspector portrays; the upper class have 'responsibilities as well as privileges.' The Inspector's character is also improvised as a dramatic device to communicate to the audience the political stances of Priestley and the new ideas of the Labour Party. Shortly after the end of the Second World War, a contemporary and promising Labour Party came in to power. The British people were exhausted from years of war, bloodshed and imperialism. They were desperate for change - a period of social reform had begun. However, the Birling family represent the anxiety and fear of this new society. Mr Birling is concerned that their high social status will come under threat, 'capital versus labour agitations.' ...read more.

In my opinion the main bearer of this moral is the Inspector. The Inspector's character acts as a catalyst or mouthpiece for Priestley's socialist theories. 'Goole' the name of the Inspector, implies that Priestley intended for him to be perceived as a ghost (Goole resembles the word ghoul which means evil spirit). This in turn, generates suspense and builds up anticipation for the audience. Inspector Goole comes across as being of an ambiguous nature. So much so that there are question marks over his existence, 'Was he really a Police Inspector?' The only mention of the Inspectors physical appearance appears in the very first set of stage directions, 'not be a big man but he creates at once an impression of massiveness, solidity and purposefulness.' As you can see, there are no indications of the Inspector's distinctive features, which instantly creates an air of mystery around the character. To conclude, Priestley uses numerous dramatic devices and character stereotypes to reflect social attitudes and political stances. These social attitudes and political stances combine to provide an important didactic purpose to the play; to show the audience how poor the condition of man was in the unjust class system that operated under na�ve capitalist control. ...read more.