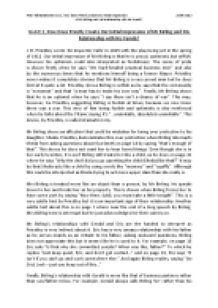 An Inspector Calls: In Act 1, How Does Priestly Create Our Initial Impression of Mr Birling and His Relationship with His Family?

Priestley demonstrates this over protection when Birling interrupts Sheila from asking questions about Eva Smith on page 18 by saying "that's enough of that". This shows he does not want her to hear horrid things. Even though she is in her early twenties, it is as if Birling still treats her like a child, as he does on page 21 where he says "Why the devil did you go upsetting the child (Sheila) like that?" It may be that Sheila acts like a child by using words like ?mummy? and ?squiffy?. Although this could be interpreted as Sheila trying to act more upper class than she really is. Mrs Birling is treated more like an object than a person, by Mr Birling. ...read more.

When was this, father?? To which he replies ?Just keep quiet, Eric, and don?t get excited?? and on page 15, Eric says ?It isn?t if you can?t go and work somewhere else.? And again Birling replies, saying ?(to Eric) Look ? just you keep out of this?? Finally, Birling?s relationship with Gerald is more like that of business partners rather than son/father-in-law. For example, Gerald always calls Birling ?Sir? rather than his first name ?Arthur? showing they have not yet developed a ?friendly relationship?. Also Birling seems like he is always trying to show-off to Gerald, as if to say his family is of a high enough class for Gerald to mix with. However, Priestley is very subtle about this, making their relationship, like the relationship with Eric, hard to interpret and therefore adding intrigue to the story. ...read more.