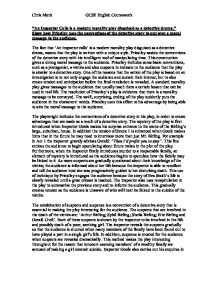 &quot;An Inspector Calls is a modern morality play disguised as a detective drama.&quot; Show how Priestley uses the conventions of the detective story to put over a moral message to the audience.

This denouement is enforced by Priestley when connections between suspects and the life of the victim are steadily exposed; this point consequently shocks the observing audience and maintains their attention. As the plot develops the suspects are exposed by the detective and are consequently left feeling responsible and also slightly puzzled. For instance in Act 3 Eric admits: "And I say the girl's dead and we all helped to kill her." Priestley effectively uses this convention of a detective story to create guilt before the twist is revealed at the end of the play. The ending of the play and any confusion is then resolved when the mystery is suddenly solved. This leaves the audience and the characters a moral message to think about. A detective story plot, (a start, development and end) is effective at engaging and satisfying the needs of a theatre audience watching the play. A developing plot builds up tension and then swiftly releases it in a surprising climax. Priestley uses other techniques to depart his play from the detective story. In the play we can observe that Priestley avoids some conventions of a detective story because there is an absence of a crime. This is because the victim Eva Smith was not murdered but instead possibly driven to her devastating suicide. Furthermore, a crime is when the guilty suspects are punished, whereas a moral wrong doing is when no punishment is given and there is a moral lesson to be learnt. ...read more.

The greatest example of a twist is the phone call at the end of the play. This allows the audience and characters to speculate what the meaning of the mystery Inspector will be. The telephone call makes the audience realise that the Inspector was used to send a powerful moral message to the audience. Also they are made to think about their actions in the future as the Birling family have just been given the opportunity to. Priestley draws attention to Eric and Sheila who separate from the others because they are remorseful of their actions and have learnt a lesson. For instance: "Whoever that chap was, the fact remains that I did what I did." Finally, Priestly hints that the Inspector is fake or even imaginary and is only used to portray a message. The inspector's name -'Goole' which could be perceived as 'Ghoul'- leaves the audience asking the question: 'Was the Inspector real?' The successful combination of a modern morality play with a detective drama is able to put over a moral message to the audience. Whilst the conventions of a detective story continue throughout the play, Priestley includes special tools such as his manipulation of time to sustain the audience's interest. Also the audience is engaged because of the gradual development of the plot that leads to a dramatic climax. This final twist is able to deliver the essential, moral message which Priestley uses to teach a lesson to the audiences for usage in their lives. By Chris Monk Chris Monk GCSE English Coursework ...read more.