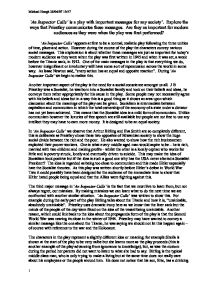 'An Inspector Calls' is a play with important messages for any society'. Explore the ways that Priestley communicates these messages. Are they as important for modern audiences as they were when the play was first performed?

`An Inspector Calls' is a play with important messages for any society'. Explore the ways that Priestley communicates these messages. Are they as important for modern audiences as they were when the play was first performed? `An Inspector Calls' appears at first to be a normal, realistic play following the three unities of time, place and action. However during the course of the play the characters convey various social messages. This exploration is about whether these messages are just as important for today's modern audience as they were when the play was first written in 1945 and when it was set, a week before the Titanic sank, in 1912. One of the main messages in the play is that everything we do, however insignificant or involuntary will have some sort of repercussion across the world in some way. As Isaac Newton said, "every action has an equal and opposite reaction". During `An Inspector Calls' we begin to realise this. Another important aspect of the play is the need for a social conscience amongst us all. J B Priestley was a Socialist, he was born into a Socialist family and took on their beliefs and ideas, he conveys them rather appropriately for his cause in the play. Some people may not necessarily agree with his beliefs and ideas but in a way this is a good thing as it shows an area upon which discussion about the meanings of the play can be given. Socialism is intermediate between capitalism and communism in which the total ownership of the economy of a state under a dictator has not yet been achieved. This means that the Socialist idea is a mild form of communism. Unlike communism however the luxuries of free speech are still available but people are not free to use any intellect they may have to earn more money. It is designed to be an equal society. ...read more.

Another example of the set being used to convey a message about a character concerns Arthur Birling; he is seated at the head of the table. The audience can gather from just a fraction of second after the play begins that Birling is an important and key character as he is shown to be senior to the other characters. His wife is seated at the other end but she doesn't `show off' about it like Birling does by keeping all the attention on himself. These ideas show the Birling family to be more obsessed by possessions and not by love or affection. Inspector Goole is a complex, enigmatic and ultimately paradoxical character. He arrives, into a normal family scene, acting reasonably normally but during his stay he interrogates each character in a highly unusual fashion which can confuse the audience. When he leaves he has torn the family apart and left them thinking that they drove a girl to suicide. The family then decides amongst themselves that the Inspector wasn't really a police officer of any sort. He could have been one of many things, firstly he could have been - but very unlikely - a real Inspector. Secondly he could have been a representation of Jesus, who had returned as he promised. He wanted show that there are still evils in the world and was using the Birling family as his example. A more likely religious figure he could be would be a Catholic Priest as Priestley was a religious man and this would also tie in with his name. The Inspector uses religious language in his final speech, "their lives, their hopes and fears, their suffering..."Another suggestion of who the man who played the Inspector could have been a journalist who had some information on them and wanted to strike lucky and scoop a story. This could be possible because he acts very much like a journalist in his direct approach but also because the Birling's tell him everything, this could show ...read more.

The play was first performed just after the Second World War, which may have influenced the thinking of the people but would still have made them think about their actions and possibly even support the socialist ideology. The play was recently reproduced for Shaftsbury Avenue under a Conservative government (funnily enough the same as when the play was first produced even though the government does not decide what is on.) It is safe to assume that people would have been affected in the same way with guilt and more understanding of the world after the play had finished. The play was terminated stopped in 2003 under a Labour government which may be due to costs or as we then lived under a different government peoples attitudes were different and the modern audience would not be affected as much as the older audiences. I personally feel that Priestley's messages are very valuable and can freely admit that after the Birlings discovered that the Inspector was fake and they were innocent I agreed with them, the ending surprised me as well as millions of people all over the world. I do not need to be convinced that the messages are important and that everyone should have at least some understanding of them. I agree with Priestley that many of the things that happened in the play were wrong but I do not understand how in a capitalist country Birling was in any way wrong to lay off several of his workers. He was entitled to as their boss and was well within his rights under a democratic government. I assume that as Priestley was a socialist he would disagree with this, as this is almost the total opposite of the socialist theology. I agree that the messages Priestley sent through the play are vitally important to any society. I also must emphasise that many of them have many important meanings that are equally if not more important within society today as they were when they were first written back in 1944/1945. ...read more.