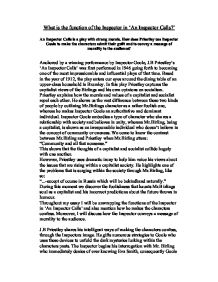 An Inspector Calls is a play with strong morals. How does Priestley use Inspector Goole to make the characters admit their guilt and to convey a message of morality to the audience?

What is the function of the Inspector in 'An Inspector Calls?' An Inspector Calls is a play with strong morals. How does Priestley use Inspector Goole to make the characters admit their guilt and to convey a message of morality to the audience? Anchored by a winning performance by Inspector Goole, J.B Priestley's 'An Inspector Calls' was first performed in 1946 going forth to becoming one of the most impressionable and influential plays of that time. Based in the year of 1912, the play enters our eyes around the dining table of an upper-class household in Brumley. In this play Priestley captures the capitalist views of the Birlings and his own opinions on socialism. Priestley explains how the morals and values of a capitalist and socialist repel each other. He shows us the vast difference between these two kinds of people by outlining Mr.Birlings character as a rather foolish one, whereas he makes Inspector Goole an authoritative and dominant individual. Inspector Goole embodies a type of character who shares a relationship with society and believes in unity, whereas Mr.Birling, being a capitalist, is shown as an irresponsible individual who doesn't believe in the concept of community or oneness. We come to know the contrast between Mr.Birling and Priestley when Mr.Birling utters: "Community and all that nonsense." This shows that the thoughts of a capitalist and socialist collide hugely with one another. However, Priestley uses dramatic irony to help him voice his views about the issues that are rising within a capitalist society. He highlights one of the problems that is surging within the society through Mr.Birling, like so: "...-except of course in Russia which will be behindhand naturally." During this moment we discover the foolishness that haunts Mr.Birlings soul as a capitalist and his incorrect predictions about the future throws in humour. Throughout my essay I will be unwrapping the functions of the Inspector in 'An Inspector Calls' and also mention how he makes the characters confess. ...read more.

Placing repetition(millions and million and million) in this speech, Goole emphasises and stresses the amount of people who are still living under ghastly conditions. "Their hopes and fears, their suffering and chance of happiness, all intertwined with our lives, with what we think and say and do." Using the Inspector as his mouthpiece, Priestley separates the rich and the poor by adding 'their' and 'our' in his speech. By stressing the two personal pronouns he makes us feel that we need to help them, and as an audience we feel involved with involved with the speech because it has an psychological affect. We feel like an interactive part of the play rather than the spectator himself. In addition, the personal pronouns implicate that the poor don't wallow in sybaritic splendour, therefore they need the people's help. Similarly, by including contrasting pairs like 'hopes' and 'fears' and 'suffering' and 'happiness', as an audience we become more aware for the need of the positive. Moreover, it highlights the good in comparison to the bad, by making it stand out. It is psychologically proved that a series of three repetitions settles with the audience. By stationing the term 'intertwined' within this sentence, the speech attains more power, influence and potential to do superior deeds. It indicates that if one thread(signifying a person) is pulled out from it's place then it all(symbolising the society) becomes unravelled. "We don't live alone. We are members of one body. We are responsible for each other." Once again, Priestley uses personal pronouns to include the audience in his vision. By situating the speech into a religious context, it becomes exceedingly deep, profound and serious. "And I tell you the time will soon come when, if men will not learn that lesson, then they will be taught it in fire and blood and anguish." Once again, the insertion of three repetitions will stay with the audience. ...read more.

This shows that Sheila is taking responsibility for her actions and is being sarcastic with her parents because she is infuriated with them for not doing the same. "(Eric)...the fact remains that I did what I did. And mother did what she did. And the rest of you did what you did to her...It's what happened to the girl and what we all did to her that matters. And I still feel the same about it..." This is an example of collective responsibility; Eric is accusing everyone for Eva's murder, and not just himself, although the other's refuse to take responsibility and Eric admits his crime. As the Inspector mentioned earlier on in the play: "We often do on the young one's. They're more impressionable." We believe this because Sheila and Eric, both being of the younger generation, have been influenced more, because they're open-minded. This implies that the future of our society will be more appropriate and sharpened, because the upcoming generation have a greater impact as they prove to be efficacious. Priestley expresses the need for a better society, by highlighting the flaws of capitalism. He divides the characters who have reformed their ways, from the characters who still remain capitalists. Sheila and Eric relinquish after their numerous attempts to convince their parents to accept responsibility for their actions. Priestley expresses this message of how the younger generation are more impressionable by reforming Sheila and Eric throughout the play. This declares that the society we inhabit today, will gradually improve and our community will eventually become more influenced by socialism. As a representative of the audience, I believe that Priestley has elevated my knowledge on the need for a better society, by making the consequences of the sole pursuit of personal wealth, extremely prominent. 'An Inspector Calls' is a play which is relevant to audiences of the twenty-first century, because although our society has improved incredibly since 1946, it still consists of some fields of '-ism'. In conclusion, Priestley has successfully established his message of certain moral values to his audience, through the Inspector's image and his powerful language. Lucky Boparai-10H ...read more.