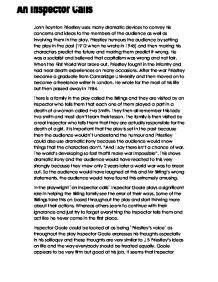 An Inspector Calls. Priestley uses many dramatic devices to convey his concerns and ideas to the members of the audience as well as involving them in the play. Priestley humours the audience by setting the play in the past (1912 when he wrote in 1945) and

John Boynton Priestley uses many dramatic devices to convey his concerns and ideas to the members of the audience as well as involving them in the play. Priestley humours the audience by setting the play in the past (1912 when he wrote in 1945) and then making his characters predict the future and making them predict it wrong. He was a socialist and believed that capitalism was wrong and not fair. When the First World War broke out, Priestley fought in the infantry and had near death experiences on many occasions. After the war Priestley became a graduate from Cambridge University and then moved on to become a freelance writer in London. He wrote for the most of his life but then passed away in 1984. There is a family in the play called the Birlings and they are visited by an inspector who tells them that each one of them played a part in a death of a woman called Eva Smith. They then all remember this lady Eva smith and most don't learn their lesson. The family is then visited by a real inspector who tells them that they are actually responsible for the death of a girl. It is important that the play is set in the past because then the audience wouldn`t understand the humour and Priestley could also use dramatic irony because the audience would know things that the characters don't. ...read more.

She tries to be controlling over Gerald "Go on Gerald just you object! "Gaily, possessively" shows Shelia trying to take over Gerald`s opinions with mocking and aggression. Towards the end of the play Sheila learns her lesson and decides she needs a change of personality and should act differently in life. This of course is a very different action to what her parents continue with. Eric who is the son of Mr. and Mrs. Birling and the brother of Sheila seems to have a very different roll in the family. He seems to be the irresponsible one and he is also an alcoholic. He also appears to be a very ignorant character as he interrupts his mother and other character s in the play on many occasions. "Women are potty about em." Is just one of the stupid comments that Eric makes and the audience would have reacted to this because Eric would have been drunk when saying this and the way he would have projected this on stage it would have been very comical. Gerald is engaged to Sheila and also a very similar character to her as throughout the play he begins regretting some of the things he has done in the past and the way he has acted. ...read more.

The sound effect plays a big part in the film of the play. The audience would like the sound effects because they would have like the way that if something bad was going the sound effects would tell them. This helps Priestley explain in further details his message that he is trying to show the audience because he can show the mood of the play through the sound effects. "The sharp ring of the front doorbell". The word sharp indicates that the doorbell is interrupting them in a negative way. Also the doorbell interrupts Mr. Birling in the middle of his speech this is an important moment in the play as Mr. Birling is making wrong predictions about everything. In Conclusion In my opinion I think that Priestley's message was to look after everybody in society the way you would like to be treated. Also to not split our community into two different social groups of "rich" and "poor" but to come together and help the less privileged people because they are becoming victims of powerful people who are arrogant and believe they have it all. This is a fantastic message because it is still relevant in today's society, this is because of the way people, especially young people, treat each other these days. If you treat people badly all the time then expect bad things to happen to you. ...read more.