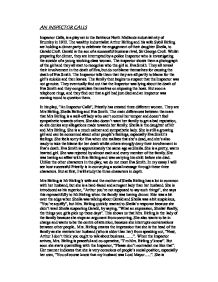 AN INSPECTOR CALLS Inspector Calls, is a play set in the fictitious North Midlands industrial city of Brumley in 1912. The wealthy industrialist Arthur Birling and his wife Sybil Birling are holding a dinner party to celebrate the engagement of their daughter Sheila, to Gerald Croft. Gerald is the son of a successful business rival, Sir George Croft. Whilst preparing for dinner, they are interrupted by a police Inspector who is investigating the suicide of a young working class woman. The inspector shows them a photograph of the girl and they all start to recognise who the girl is. Eva Smith. They all reveal their involvement in the death of Eva, but do not blame themselves for causing the death of Eva Smith. The Inspector tells them that they are all partly to blame for the girl's suicide and then leaves. The family then begins to suspect that the Inspector was not genuine. They eventually find out that the Inspector was lying about the death of Eva Smith and they congratulate themselves on exposing the hoax. But soon a telephone rings, and they find out that a girl had just died and an inspector was coming round to question them. In his play, "An Inspector Calls", Priestly has created three different women. They are Mrs Birling, Sheila Birling and Eva Smith. The main differences between them are that Mrs Birling is a well-off lady who can't control her temper and doesn't feel sympathetic towards others. She also doesn't want her family to get a bad reputation, so she denies any allegations made towards her family. Sheila is the daughter of Mr and Mrs Birling. She is a much calmer and sympathetic lady. She is still a growing girl and can be concerned about other people's feelings, especially Eva Smith's feelings. She feels sorry for Eva when she realizes that she's dead, and she's also ready to take the blame for her death whilst others strongly deny their involvement in Eva's death. ...read more.

There is an affinity between Eva and Sheila: Sheila might have suffered the same fate as Eva, had not luck given her a more privileged position in the society. The mystery of Eva Smith is a part of the larger mystery of the play. By assembling all these events and characteristics into one life story, Priestly creates sympathy in the audience and in some of the play's characters. We can see a hopeful young life destroyed by their complacency, selfishness and thoughtlessness. The differences in the characters are revealed through their language, actions and stage directions. Mrs. Birling is a ruthless and merciless human being compared to Sheila and Eva Smith. Once she finds out that the Inspector's trying to frame the family for murdering Eva, she completely looses the plot and changes her tone because at first, when the Inspector arrived, she kindly greeted him with a pleasant tone, "Good evening Inspector", but as soon as she found out what the Inspector was driving at, she raised her voice, "I beg you pardon" and soon she really starts to get annoyed, "I don't think we want any further details of this disgusting affair", she said haughtily. She also boasts of the work she has done in the charity, when the Inspector points out that she was a member in the Brumley Women's Charity Organisation", Yes. We've done a great deal of useful work in distress appeal for help......", says Mrs. Birling with dignity. Mrs. Birling always points and walks towards the person she's talking to, (rising and crossing to Sheila; bitterly) "And this is the time you choose to tell me". Sheila's approach towards the Inspector and other members of the family is quite straightforward and tries to create the odd joke, "No, he's giving us rope - so that we'll hang ourselves" and "Well, we didn't think you meant Buckingham Palace", Sheila said with a laugh. ...read more.

Sheila on the other hand is more of a peacemaker. She hardly gets annoyed at neither the Inspector or with her mum. She doesn't try to create any arguments with the Inspector or her mum. She regularly gets told off by her mum for sticking her nose into her conversations. By arguing with each other, the characters actually reveal information that was meant to be secret, for example, Sheila was the only one to recognize that Eric had a drinking problem, but when the family started arguing, the truth came out and soon the family members found out about Eric's drinking problem. I think Priestly is quite effective in conveying a social message through his characterisations of the three women. The play "An Inspector Calls" is set in 1912 but was written in 1945. Edwardian society at that time (1912) was strictly divided into social classes. Below the very rich were the middle classes (doctors and merchants, shop workers and clerks), after that came the craftsmen and skilled workers. At the very bottom of the social ladder was the largest class of all - the ordinary workers and the poor, many of whom lived below the poverty level. Priestley was writing the play for a middle class audience and was trying to speak up for the working class by showing how the Birlings and Gerald Croft were all involved in making a young working class girl's life a misery. Priestley wants to show us that we have a responsibility to others to act fairly and without prejudice and that we do not live in isolation. Our actions affect others. This is the concept of collective responsibility. Priestley says, 'things could really improve if only people were to become more socially responsible for the welfare of others. We have to confront our mistakes and learn from them. He uses Mrs. Birling as the higher class and Eva as the lower class. He shows us how the rich mistreated the poor and what respect the lower class people got from the higher class people. ?? ?? ?? ?? ...read more.