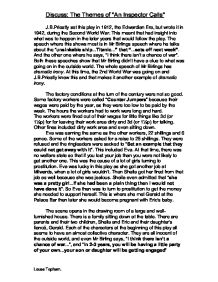 J.B.Priestly set this play in 1912, the Edwardian Era, but wrote it in 1942, during the Second World War. This meant that had insight into what was to happen in the later years that would follow the play. The speech where this shows most is in Mr Birlings speech where he talks about the "unsinkable ship...Titanic..." that "...sets off next week". And the other one where he says, "I think there isn't a chance of war". Both these speeches show that Mr Birling didn't have a clue to what was going on in the outside world. The whole speech of Mr Birlings has dramatic irony. At this time, the 2nd World War was going on and J.B.Priestly knew this and that makes it another example of dramatic irony. The factory conditions at the turn of the century were not so good. Some factory workers were called "Counter Jumpers" because their wages were paid by the year, as they were too low to be paid by the week. The hours the workers had to work were long and hard. The workers were fined out of their wages for little things like 3d (or 11/4p) for for leaving their work area dirty and 3d (or 11/4p) for talking. Other fines included dirty work area and even sitting down. Eva was earning the same as the other workers, 22 shillings and 6 pence. ...read more.

At this point in her life, Eva did what a lot of young girls in her position would do; she turned to prostitution. By this time, she had changed her name to "Daisy Renton" That is where Gerald met her. Gerald took her home and she became his mistress. He made her happy for a time but then he had to leave her. Eric then came along and made her pregnant. He gave her stolen money from his father's office. Eva found this out and she refused his money. She then went to Mrs Birling's "Brumley Woman's Charity Organisation" for help and someone to listen to her. Mrs Birling used her prominent position and made sure that her plea for help was refused, as she was "incompetent" and "used" the Birlings family name. We find out later in the play that she only did this to protect Eric, and the news of his involvement in the play. Mrs Birling didn't know this and she thought that Eva was using her name to spite her. Then Priestly goes on to look at how each character responds to their guilt. Sheila is the most upset as when The Inspector shows her the photo and Sheila then runs out of the room in tears. ...read more.

The Inspectors speech was totally different to Mr Birlings because he said that "...men will learn...in fire and blood and anguish". This would be the 2nd World War. The play that we saw at the Theatre Royal showed that the Inspector was from 1942-1945. We know this as at the Inspectors entrance, he is wearing the clothes of the time. Mr Birling's speech basically said that a man should only look after his family and not worry about the world outside. He doesn't know how wrong he was at the start of the play. Mr Birling does seem to take a very small part in actually accepting the news of each members involvement, but after they find out that it wasn't a real police inspector, then he seemed to think that the family could go back on as before, but only Sheila and Eric can accept the consequences of what they have done. This play does try and make you think. Was the photo that the Inspector showed each of them the same or different? I think that Priestly made his Inspector seem to have the insight of the future, and so it seems that he is warning the family that society should care for each other, rather than exploit each other, as the poor getting poorer and the rich getting richer from the poor' taxes. Discuss: The Themes of "An Inspector Calls" Louse Topham. ...read more.