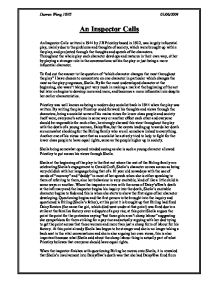 An Inspector Calls An Inspector Calls written in 1944 by J B Priestley based in 1912, was largely influential play, mainly due to the problems and thoughts of society, which were brought up within the play, and projected through the thoughts and speech of the characters. Throughout the whole play each character develops and matures in their own way, either by playing a stronger role in the conversations within the play or just being a more influential character. To find out the answer to the question of "which character changes the most throughout the play" I have chosen to concentrate on one character in particular which changes the most as the play progresses, Sheila. By far the most undeveloped character at the beginning, she wasn't taking part very much in making a mark at the beginning of the act but later on begins to develop more and more, and becomes a more influential role despite her earlier characteristics. Priestley was well known as being a modern day socialist back in 1944 when the play was written. By writing the play Priestley could forward his thoughts and views through the characters, being a socialist some of his mains views for lower class people and society itself ...read more.

But while Gerald is explaining the story to the inspector Sheila cuts in to express what she's feeling, by saying "yes but why are you saying that to him? You ought to be saying it to me"; this shows in her language sort of where she uses a rhetorical question to state her point and shows openly what she is feeling at that point instead of bottling it up. Also soon as this news is broken to everyone, Sheila develops even more, piecing together what she had already known about Gerald, e.g. she had a suspicion something wasn't quite normal when she noticed Gerald was spending a lot of time at "work" supposedly and spending a lot of time away from her but of course now its been revealed that Gerald had an affair, this shows that Sheila's character has developed by showing us that she is more aware of what's going on and is relying less on others to fill her in on all the information. After this Sheila's character differs a lot from what her character was like at the beginning, further into the inquiry the inspector swiftly moves onto Mrs B. ...read more.

point to her own father that the women weren't a form of cheap labour, which represented the view which Priestley believed that everyone should have equal rights, but she also represented what modern day society was like back then and the people higher up in society what they were like also. Sheila's character overall was a very important role within the play, to not only use as a sort of puppet for Priestley to put across his socialist views and thoughts, but as a contrast to modern day society back then and show how society can changed by using herself as a role model, from the beginning where she was very bratty and unaware of how her actions could effect other people (note: a key socialist view of Priestley), and how towards the end she realised that she would have to come to terms with what she has done and change he actions in the future to make sure it doesn't happen again. By far in my own opinion, Sheila's character changed the most throughout the whole play in all aspects, from the development of her use of language to her overall role in the play itself, conversational wise and acting wise. Darren Wong 10N5 01/06/2004 ...read more.