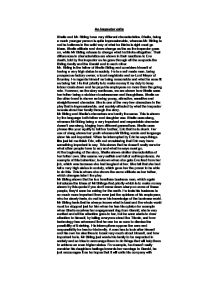 An Inspector calls Sheila and Mr. Birling have very different characteristics. Sheila, being a much younger person is quite impressionable, whereas Mr. Birling is not he believes in the solid way of what he thinks is right must go ideas. Sheila attitude and views change as the as the inspector goes on, while Mr Birling refuses to change what he thinks altogether. Their differences in characteristics are shown in their reactions to Eva death, told by the inspector as he goes through all the suspects the Birling family and the Gerald and to each other. Mr. Birling is the father of Sheila Birling and considers himself of having a very high status in society. He is a self made man, being prosperous factory owner, a local magistrate and ex-Lord Mayor of Brumley. He regards himself as being reasonable and what he sees fit as being fair. His first priority is to make money it my duty to keep labour costs down and he pays his employees no more than the going rate. However, as the story continues, we are shown how Sheila sees her father being a stubborn businessman and thoughtless. Sheila on the other hand is shown as being young, attractive, sensitive and straightforward character. She is one of the very few characters in the play that is impressionable, and acutely affected by what the Inspector reveals about her family through the story. Mr Birling and Sheila's characters are hardly the same. ...read more.

Whereas Sheila says she thinks it was cruel and vile. This again emphasises how unrepentant Mr Birling is and how remorseful and sympathetic Sheila is. Mr Birling also says is there any reason why my wife should answer questions from you, Inspector? Trying to bring his high social classification, into the matter to threaten the Inspector. Sheila, on the other hand has dismissed her social class, as soon as she hears of how her pride got in the way of a woman's job. Even after the leaves the Inspector, and when they all find out that the Inspector was a hoax, she is unable to accept her parent's attitude and is both amazed and concerned that they haven't learned anything from the whole incident. She is one of the few to realise that even though the Inspector is a hoax, the family have still behaved in an entirely unsuitable manner. All Mr Birling can say to the attitude of his daughter when he finds out that the Inspector is a hoax, is that the famous younger generation who know it all. He amuses himself by thinking back to the faces of his children when they were exposed to the causes Eva's death, adding they can't even take a joke. This shows how he continues to ignore the shameful things his family has done. He refuses to learn of his responsibilities to others less fortunate than himself and is still insensitive, unlike Sheila, who displays exactly the opposite attitude to her father. Her readiness to learn from the experience proves to be a great contrast to that of her father. ...read more.

This essay shows a good understanding of the text but no textual evidence is used in the required format, as formal quotations, which is an must for any analytical essay.