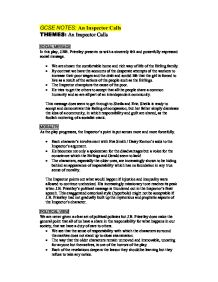 GCSE NOTES: An Inspector Calls THEMES: An Inspector Calls SOCIAL MESSAGE In this play, J.BB. Priestley presents us with a sincerely felt and powerfully expressed social message. * We are shown the comfortable home and rich way of life of the Birling family. * By contrast we have the accounts of the desperate attempts of the workers to increase their poor wages and the drab and sordid life that the girl is forced to live as a result of the actions of the people such as the Birlings. * The Inspector champions the cause of the poor. * He tries to get the others to accept that all the people share a common humanity and so are all part of an interdependent community. This message does seem to get through to Sheila and Eric. Sheila is ready to accept and demonstrate this feeling of compassion, but her father simply dismisses the idea of a community, in which responsibility and guilt are shared, as the foolish muttering of a socialist crank. MORALITY As the play progresses, the Inspector's point is put across more and more forcefully. * Each character's involvement with Eva Smith / Daisy Renton's adds to the Inspector's argument. * He becomes not only a spokesman for the disadvantages but a voice for the conscience which the Birlings and Gerald seem to lack! * The characters, especially the older ones, are increasingly shown to be hiding behind an appearance of respectability which has no foundation in any true sense of morality. The Inspector points out what would happen if injustice and inequality were allowed to continue unchecked. His increasingly missionary tone reaches its peak when J.B. Priestley's political message is thundered out in the Inspector's final speech. This exaggerated oratorical style (hyperbole) might not be acceptable if J.B. Priestley had not gradually built up the mysterious and prophetic aspects of the Inspector's character. ...read more.

STRUCTURE This play follows the tradition of what is known as a well-made play. It has a plot in which the action flows smoothly and all the parts fit together precisely, rather like parts of a jigsaw puzzle. As a result the characters and the audience move from a state of ignorance to a state of knowledge. Priestley wanted his play to have a uniformity of manner and tone with one situation rapidly moving on to the next. He felt that he could best achieve this by writing quickly, and indeed he completed this play in a week. The unities of time and place is achieved by the events all taking place in the dining room and the action running continuously through all the three Acts. Even when there is a break between Acts where an interval might be placed, the start of the next Act takes us to the same point in time at which we left the action. The action is taken forward by the Inspector's questioning of each character in turn. Their reasons for entering or leaving are always plausible and always allow some new aspect of the plot to be introduced or something mentioned earlier to be developed. The play is built up in a series of episodes and each character has either a leading or supporting role in each of these episodes, even in their absence. Gerald's decision to go for a walk, for example, means that he can alter the course of events after the Inspector's departure, while Eric's similar absence allows his involvement with Eva Smith/ Daisy Renton to be explored in a way that it could not be if he were present. Each new revelation, prompted by the Inspector's careful use of the photograph or information from the dairy, adds to the overall picture of those two crucial years in the girl's life. Each part fits together and helps to complete the jigsaw of events and involvements. ...read more.

and died in misery and agony" (Act I, p. 28) as well as repeating short, sharp, almost brutal reminders that the girl is dead. By doing this, Priestley keeps the picture of the girl in the mortuary constantly before our eyes. IRONY The Inspector is even more ironic in one of his early exchanges with Mr Birling in Act I. Birling claims that it would be "very awkward" if we had to be "responsible for everything that happened to everybody we'd had anything to do with" (Act I, p. 14). The Inspector echoes Birling's words "Very awkward" (Act I, p. 14). At first, we might think the Inspector was agreeing with Birling, but we come to realise that he is hinting that what is to follow is indeed going to become very awkward because he will show that they are responsible, and will be held responsible, for what they have done to the girl. Much of the play's success depend upon the dramatic irony which J.B. Priestley creates. We see this in the mistaken view that Mr Birling has about the future, his faith in technology and belief in peace. We can guess from this that his view of a man's responsibility will be equally wrong. Similarly, when Sheila has worked out that Eric might well be the father of Eva Smith's child, there is irony in that Mrs Birling has not realised it and is unwittingly demanding that an example should be made of none other than her own son. Perhaps there is a different sort of irony in the fact the Inspector has been talking as much to us, the audience, as to the characters. We have to ask ourselves whether we are in a position to judge what has happened when we are probably as guilty of acting irresponsibly and unkindly as anyone of stage! The irony strengthens our feeling that J.B. Priestley's type of socialism is not so much about politics but about caring and even, perhaps, about love. ...read more.