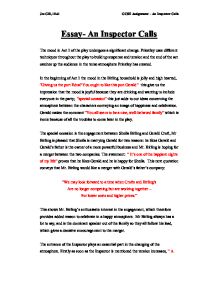 An Inspector Calls - The mood in Act 1 of the play undergoes a significant change.

Essay- An Inspector Calls The mood in Act 1 of the play undergoes a significant change. Priestley uses different techniques throughout the play to build up suspense and tension and the end of the act catches up the audience in the tense atmosphere Priestley has created. In the beginning of Act 1 the mood in the Birling household is jolly and high hearted, "Giving us the port Edna? You ought to like this port Gerald'' this give us the impression that the mood is joyful because they are drinking and wanting to include everyone in the party; "special occasion" this just adds to our ideas concerning the atmosphere between the characters conveying an image of happiness and celebration. Gerald makes the comment "You all seem to be a nice, well-behaved family" which is ironic because of all the troubles to come later in the play. The special occasion is the engagement between Sheila Birling and Gerald Croft, Mr Birling is pleased that Sheila is marrying Gerald for two reasons: he likes Gerald and Gerald's father is the owner of a more powerful business and Mr. Birling is hoping for a merger between the two companies. The statement: " It's one of the happiest nights of my life" proves that he likes Gerald and he is happy for Sheila. ...read more.

Two hours ago a young woman died in the infirmary. She'd been taken there this afternoon because she'd swallowed a lot of strong disinfectant. Burnt her inside out, of course." The way the Inspector delivers the news of the girl's death is so calm and cool, it sends the audience into shock, going into the gruesome details which a policeman would normally not do. "Yes, she was in great agony. They did everything they could for her a t the infirmary, but she died. Suicide of course." This quotation further highlight the points made it also shows the writer's technique here. Writing with short sharp sentences adding tension and drama, and completely turning the play's atmosphere into one of shock. The atmosphere also turns from relaxed to tense by the reaction of Mr. Birling, Sheila, Gerald and Eric. Mr Birling's reaction is one of surprise that he is being asked questions; his language and attitude towards the inspector are obstinate. He thinks he is superior to the Inspector and higher up on the social ranking, so that he can treat Inspector Goole like dirt.He is tries to get rid of him as fast as possible so he can carry on with the celebrations; (Rather impatiently) ...read more.

But the minute the Inspector arrives the illumination changes to a "harsh bright light" which symbolises a change in the mood and heightens interrogation. This is also an indicator for the audience that tension is building and something is about to erupt; the story is keeping the audience on the edge of their seats. Therefore in conclusion Priestly has introduced tension before the inspector arrives on stage with a "half playful- half serious" tone representing a hint of tension. The superficial "relaxed" dinner party is rapidly destabilized when the inspector arrives. He smashes the sense of false security and tries to get the Birling's to realize their errors and admit responsibility. The Birling's symbolize a microcosm of civilization at the time (1910), and clearly illustrate the class system in Britain at that time. In particular, Mr Birling's anticipatory conversation with Gerald regarding his 'knighthood', and the social suitability of the impending marriage highlights his social climbing aspirations. Priestley wrote the play in nineteen-forty-five at the end of World War two, and he wanted to commentate on all the things that have happened. Since 1910 such as the Titanic, and to show how much two world wars have changed society and the woman's role in life. He also portrays a deeper message he wants to advocate a sense of community- people looking after each other Joe Gill, 10A1 GCSE Assignment - An Inspector Calls ...read more.