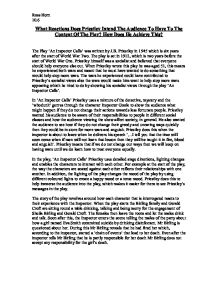 An Inspector Calls - What reactions does Priestley intend the audience to have to the content of the play? How does he achieve this?

What Reactions Does Priestley Intend The Audience To Have To The Content Of The Play? How Does He Achieve This? The Play 'An Inspector Calls' was written by J.B. Priestley in 1945 which is six years after the start of World War Two. The play is set in 1912, which is two years before the start of World War One. Priestley himself was a socialist and believed that everyone should help everyone else out. When Priestley wrote this play he was aged 51, this means he experienced both wars and meant that he must have wanted to do something that would help stop more wars. The wars he experienced could have contributed to Priestley's socialist views also the wars would make him want to help stop more wars appearing which he tried to do by showing his socialist views through the play 'An Inspector Calls'. In 'An Inspector Calls' Priestley uses a mixture of the detective, mystery and the 'whodunit' genres through the character Inspector Goole to show the audience what might happen if they do not change their actions towards less fortunate people. Priestley wanted his audience to be aware of their responsibilities to people in different social classes and how the audience viewing the show affect society, in general. He also wanted the audience to see how if they do not change their greedy and uncaring ways quickly then they could be in store for more wars and anguish. Priestley does this when the inspector is about to leave when he delivers his speech '...I tell you that the time will soon come when if men will not learn that lesson then they will be taught it in fire, blood and anguish'. Priestley means that if we do not change our ways then we will keep on having wars until we do learn how to treat everyone equally. In the play, 'An Inspector Calls' Priestley uses detailed stage directions, lighting changes and enables the characters to interact with each other. ...read more.

By this Priestley wanted to show us why we should listen to younger people because they can embrace new ideas and can accept new lifestyles easily. In addition, Priestly wanted to show us how the older generation can be set in their ways and do not embrace change easily. From both Gerald and Eric's interviews, it seems that they both use their positions to manipulate and abuse Eva Smith. Gerald, at first, helped her out of a bad situation, housed her, and cared for her. Soon after this, he starts to use her and she becomes his mistress, 'Yes. I suppose it was inevitable. She was young and pretty and warm hearted - and intensely grateful. I became at once the most important person in her life - you understand?' Gerald is the only person in Eva's life that treated her well. He gave her lodging, money, care and possibly loves her. In the end, though Gerald could not accommodate her in that house forever because his friend is coming back. Gerald then gave her enough money to last her a month or two and had to make her leave the house. Eva knew that it would not last forever but when she is forced to leave, she used the money to make her happiness last longer by going away for two months on holiday. Gerald at first appears to care quite deeply for Eva Smith 'In that case - as im rather more - upset - by this business than I probably appear to be - and - well, I'd like to be alone for a while...' Later in the play we find out that he does not feel sorry for her because he tries to forget her and cover up what happened and heads the idea that all that happened when the inspector did his enquiries hoax. When Eric was with Eva Smith he did not help her from the start like Gerald. ...read more.

The act ends with Eric looking pale and distressed as he enters the room and the curtain falls. This tension at the end of act two also keeps the audience interested in the play which also enhances Priestley's ability to get across his message. When Act three is about to end the family and Gerald are much happier after they make themselves believe that it is all a hoax and they do not have to learn form the experience. Sheila and maybe Eric are the only people to learn from this experience, possibly because they are younger and can accept new things faster and easier. Then the phone rings. Silence fills the room and tension builds up. Mr Birling slowly walks over to the phone and picks up the receiver. After a short conversation, Mr Birling comes back out with a panic-stricken look on his face and brings himself to say 'that is the police. A girl has just died - on her way to the infirmary - after swallowing some disinfectant and a police inspector is on his way here - to ask some - questions - ' This brings back all the tension that is lost when the Birlings and Gerald were discussing whether the Inspector is a hoax. This is also Irony on Priestley's part. It is an ironic reference forward to World War Two, World War Two happened because we didn't learn from World War One, because the Birlings did not learn from their experience with the Inspector they have to go through another enquiry. This leaves the audience thinking about the ending that in itself can help express Priestleys message by trying to show us what happens if we don't learn from past mistakes. Priestley leaves the audience with the problem of deciding who or what is the real role of the inspector. Whether he is a ghost or hoax does not seem as important as Priestley's / The Inspectors message. As Sheila said, "Well he inspected us alright." Perhaps that is what Priestley intended the audience to understand. Ross Horn 10.6 ...read more.