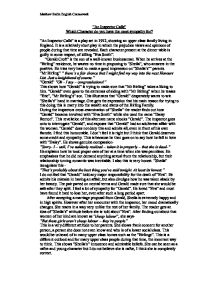 &quot;An Inspector Calls&quot; - Which Character do you have the most sympathy for?

"An Inspector Calls" Which Character do you have the most sympathy for? "An Inspector Calls" is a play set in 1912, showing an upper class family living in England. It is a relatively short play in which the prejudice views and opinions of people during that time are revealed. Each character present at the dinner table is guilty in some respect, of killing "Eva Smith". "Gerald Croft" is the son of a well-known businessman. When he arrives at the "Birling" residence, he wastes no time in proposing to "Sheila", who answers in the positive. He tries very hard to make a good impression on "Sheila's'" parents. "Mr Birling" " there's a fair chance that I might find my way into the next Honours List. Just a knighthood of course." "Gerald" "Oh - I say - congratulations!" This shows how "Gerald" is trying to make sure that "Mr Birling" takes a liking to him. "Gerald" even goes to the extremes of siding with "Mr Birling" when he teases "Eric", "Mr Birling's" son. This illustrates that "Gerald" desperately wants to win "Sheila's" hand in marriage. One gets the expression that his main reason for trying to this doing this is marry into the wealth and status of the Birling Family. During the inspectors cross-examination of "Sheila" the reader finds out how "Gerald" became involved with "Eva Smith" while she used the name "Daisy Renton". ...read more.

After saying this, "Eric, his son refers back to an earlier moment in the evening when "Mr Birling" claimed that one should only be concerned with what is his. However when it is brought to attention in front of the inspector, "Arthur" immediately dismisses it. I feel this is a key moment in the play. He has realised that he is wrong in what he had said. He does not admit this though. If "Mr Birling" had acknowledged that his opinion was wrong I would respect him a lot more. Instead he does not dwell on the situation thus showing that he has not learnt the lesson that is taught in the book - equality and care for others. For this reason, I do not have any feelings of sympathy for "Birling", as he does not change his attitude even after he is shown it is wrong. This is further underlined in the last part of the play. He decides to phone the infirmary to see if someone has actually died. When he receives the answer he is joyful. He brushes aside the whole evening and treats it as a hoax. He takes no notice of what has been said and is almost proud that he has shown the inspector was wrong. This sums up his character and attitude. ...read more.

After his mother tries to reason with "Eric", he says "You don't understand anything. You never did. You never even tried - you" His anger shows that he understands that the way he treated "Eva" was wrong. He is distressed. When the inspector reinforces his theory and again tells the "Birlings" that they are responsible for "Eva Smith's" death, Eric says "My G-d - I'm not likely to forget". This shows his guilt and like "Sheila" he wishes that nothing had ever happened. I have some sympathy for "Eric". He has realised that he made a fatal error by not concerning himself with "Eva's" feelings. He regrets treating her the way he did and realises that all human beings have rights. The character I have most sympathy for is "Gerald". Even though he does not accept the responsibility of "Eva's" death as much as "Sheila" and "Eric", I feel sorry for him because he was the only character that had a real, loving relationship with "Eva". "Sheila" and "Eric" feel remorse, "Gerald is miserable because he has lost someone. As I have already mentioned, I have no sympathy for "Mr & Mrs Birling" because of the foolish and close-minded way the act. They are at fault as much as anyone else for "Eva's" suicide but refuse to take any responsibility. They do not learn the extremely important lesson taught in the book that tells us to treat everyone with respect, regardless of their background. Matthew Beilin English Coursework ...read more.