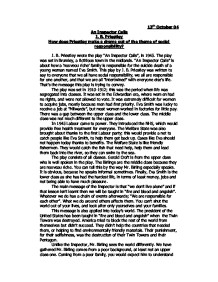 An Inspector CallsJ. B. Priestley - How does Priestley make a drama out of the theme of social responsibility?

13th October 04 An Inspector Calls J. B. Priestley How does Priestley make a drama out of the theme of social responsibility? J. B. Priestley wrote the play "An Inspector Calls", in 1945. The play was set in Brumley, a fictitious town in the midlands. "An Inspector Calls" is about how a 'nouveou riche' family is responsible for the suicide death of a young woman named Eva Smith. This play by J. B. Priestley was written to say to everyone that we all have social responsibility, we all are responsible for one another, and that we are all "intertwined" with everyone else's life. That's the message this play is trying to convey. The play was set in 1910-1912; this was the period when life was segregated into classes. It was set in the Edwardian era, where women had no rights, and were not allowed to vote. It was extremely difficult for women to acquire jobs, mostly because men had first priority. Eva Smith was lucky to receive a job at "Milwards", but most women worked in factories for little pay. There was a gap between the upper class and the lower class. The middle class was not much different to the upper class. In 1945 Labour came to power. They introduced the NHS, which would provide free health treatment for everyone. The Welfare State was also brought about thanks to the first Labour party; this would provide a net to catch people like Eva Smith, to help them get back up. Cases like Eva should not happen today thanks to benefits. The Welfare State is like friendly fishermen. They would catch the fish that need help, help them and lead them back into the river, so they can swim to the sea. The play consists of all classes. Gerald Croft is from the upper class who is well spoken in the play. The Birlings are the middle class because they are nouveau riche. ...read more.

This is where for the first time, we see Sheila start to see a 'vice versa' happen. Sheila has become more mature, and her parents have become "childish" as she calls them. Unfortunately, Mr. Birling takes no notice and says, "I won't have that sort of talk", and resumes his fake, pleasurable mood. After Mr. Birling finds out that the Inspector was a fake, he sees himself and his family as 'angels' again, as he thought at the beginning, even though the crime had still been committed. "I suppose we're all nice people now", Sheila tries to indicate to her father that everything's not all right by including bitter sarcasm. It would seem that even if they didn't find out about the Inspector being a fake, the parents would still only be worried about their reputation, rather than the death of an innocent woman. As Mr. Birling shouts "angrily" to Eric, "There'll be a public scandal". Where as Sheila and Eric seem not to care whether the Inspector was a fake. "It doesn't make a difference". Overall Mr. And Mrs. Birling didn't learn the message. The same applies to President Bush. After all the attacks on the USA, he still tries to block the world from his country, so his lesson of social responsibility is still to be learnt. Unlike the Inspector, Sheila's reactions were the opposite of Mr. Birling after the Inspector left. When Sheila first enters the play, whilst the Inspector is there, she seems to be a loudmouth say-what-when-you-want person. For example, Mrs. Birling was talking to her husband about not talking about business on an occasion like this and Sheila say her opinion, "neither do I. All wrong." As well as being a loudmouth, she also likes to be kept up-to-date. Whatever she misses, she listens to the next thing she hears and asks about it. When she misses what happened about Eva, she does her routine to know what's happening. ...read more.

Mr. And Mrs. Birling and Gerald. Whereas it was learnt by Eric and Sheila. This is odd, because the older generation is meant to be more mature and understanding than the younger generation, but in this case, it's the other way round. J. B. Priestley is radical by undermining the two most important characters, the Inspector and Eva. This is a risky technique to use, because it could ruin the whole play. He has done so much to build up the Inspector up, but decides to destroy him by a phone call. Fortunately, this works out for an advantage for J.B. Priestley, as this changes the mood for Mr. And Mrs. Birling and Gerald, which is a contrast from the sad, miserable mood everyone was in before the Inspector left. Also, Eva Smith's character was being built up throughout the play, as we found out more about her, but at the end was removed from the play by another single phone call, this time to the hospital, to find out if Eva has really died. However, this works again well with the tension. Then we get another phone a call, from the hospital to say a girl really has died, and an "Inspector will be on his way". This repeated cycle of the Inspector coming at the end also adds to the cliffhanger effect. Overall it was a risky technique, but worked well to improve the tension. The play is like a murder mystery, because of the Inspector being present. In this case, it is not a murder, but a suicide. Consequently, it is the inspection of their actions to drive Eva to her death, rather than them actually killing her. J.B. Priestley's "An Inspector Calls" is a successful play, teaching people about social responsibility and how you can't get away from it. J. B. Priestley tried to make the play's theme of social responsibility and did exceedingly well. However, only the majority of the people learn that lesson. Some people even in today's world still haven't learnt that lesson. Hopefully, another play will help to teach them. ...read more.