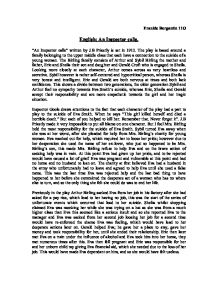 Frankie Bergamin 11O English: An Inspector calls. "An Inspector calls" written by J.B Priestly is set in 1912. The play is based around a family belonging to the upper middle class that each have a connection to the suicide of a young woman. The Birling family consists of Arthur and Sybil Birling the mother and father, Eric and Sheila their son and daughter and Gerald Croft who is engaged to Sheila. Looking more closely at each character, Arthur comes across as very heartless and secretive. Sybil however is rather self-centered and hypocritical person, whereas Sheila is very honest and intelligent. Eric and Gerald are both nervous at times and both lack confidence. This shows a divide between two generations, the older generation Sybil and Arthur feel no sympathy towards Eva Smith's suicide, whereas Eric, Sheila and Gerald accept their responsibility and are more empathetic towards the girl and her tragic situation. Inspector Goole draws attentions to the fact that each character of the play had a part to play to the suicide of Eva Smith. When he says "This girl killed herself and died a horrible death." But each of you helped to kill her. Remember that. Never forget it". J.B Priestly made it very impossible to put all blame on one character. But I feel Mrs. Birling held the most responsibility for the suicide of Eva Smith. Sybil turned Eva away when she was at her worst, after she pleaded for help from Mrs. ...read more.

"Oh-how horrible. Was it an accident?" she starts to be concerned for Eva, although it's too late. She seems to show a genuine interest in the girls' life, this is ironic however as before she was not concerned about her, and got her fired without a second thought to her welfare. Sheila's reaction to questioning was quite strong, "but these girls aren't cheap labour-they're people". At this point you start to see the social divide between the upper and lower classes become more immanent you also become aware of how attitudes were changing towards the poor during this time. The play is set during the liberal reforms; when people began change their attitude towards the poor. Before, many upper and middle class people thought that they deserved to be poor as they were lazy or stupid. The reforms lead to people thinking of the 'deserving poor' and being more empathetic to them. The younger generation shows the new ideals and the older generation shows how people used to think. Sheila begins to feel that the inspector was blaming her and the family, so she got angry and said "what do you mean by saying that? You talk as if we were responsible?" she starts to defend herself and her family, because she cares about them all and she doesn't want any of them to be in trouble, and get hurt. Eva met Eric and Gerald on separate occasions. Gerald she met at the Palace bar they then carried on a relationship. ...read more.

In the end does it really matter if it was one girl or many? Priestly deliberately set this play in 1912 because the date represented an era when all was very different from the time he was writing. In 1912, rigid class and gender boundaries seemed to ensure that nothing would change. Yet by 1945, most of those class and gender divisions had been breached due to the world wars men and women became equal, and even upper and lower classes began to bridge the social gaps through working together and backing England in the war. Priestley wanted to make the most of these changes and create an interesting drama about recent events which really made you examine your actions. Through this play, he encourages people to seize the opportunity the end of war had given them to build a better, more caring society. An inspector calls is a play with many layers of meaning. It raises social, historical, cultural, moral and gender issues. It challenges the audience to look outside of themselves, and put themselves in other people's shoes. It shows the points of view of each character, and explains their reasons for their actions. It is a play that all people should read to teach them respect in everyday life, and not just the kind of respect that most people live by. However, the play is above all a reiteration of the need for community spirit and a warning that society will suffer if society is dominated by overriding self interest. ...read more.