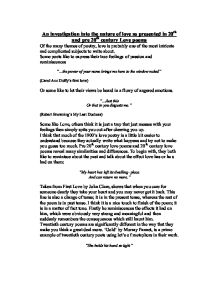 An investigation into the nature of love as presented in 20th and pre 20th century Love poems Of the many themes of poetry, love is probably one of the most intricate and complicated subjects to write about. Some poets like to express their true feelings of passion and reminiscences "...the power of your name brings me here to the window naked" (Carol Ann Duffy's first love) Or some like to let their views be heard in a flurry of angered emotions. "...Just this Or that in you disgusts me." (Robert Browning's My Last Duchess) Some like Love, others think it is just a trap that just messes with your feelings then simply spits you out after chewing you up. I think that much of the 1900's love poetry is a little bit easier to understand because they actually write what happens and try not to make you guess too much. Pre 20th century love poems and 20th century love poems reveal many similarities and differences. To begin with, they both like to reminisce about the past and talk about the effect love has or has had on them: "My heart has left its dwelling- place And can return no more." ...read more.

"And then blood rushed to my face and took my site away" (John Clares First Love) When you truly love someone and not just think that you do, and ponder whether it is true or not, you don't see fault with the fact that they might look like an ill favoured un-inviting Gargoyle and disregard the fact that they could give off an odour of a dead sewer Rat but all within reason of course. A way in which they differ is when they talk about their first love. In Robert Graves' 'A Dream of Frances Speedwell', he focuses more on how the girl looked "You were tall and fair, just seventeen perhaps" I personally think that this isn't a true sign of affection, because true love isn't a physical thing. I admit that even though Robert Graves focuses on physical appearance, his language has sincere undertones, 'fair' is a nice word it isn't in too much of a provocative language but as more of a sincere manner, nowadays in society the emphasis is more on looks than personality, so he isn't being too melodramatic in his expression. In Clare's first love he describes more the effect it had on him, than how the girl actually looks to him. ...read more.

"...My poor heart was strange to men" So after these turn of events she is not really going to want to trust men, which is going too be extremely hard seeing as they are everywhere. But the ironic thing is in the twentieth century it seems to come true that men are very easily overcome "I fell in love at my first evening party You were tall and fair." This shows that if a man falls in love so easily that he probably won't be faithful. I find this quite a big similarity between pre twentieth and twentieth century love poems Overall, I think that the nature of love presented in pre twentieth and twentieth century love poems, still follow the same rules and boundaries to show the fact that love isn't all it is made out to be, by just speaking from the heart. Like the similarities between the unfaithfulness of men, e.g. in 'ballad' "A faithless Shepard" or the very similar twentieth century "I fell in love at my first evening party"'s Sincere, direct but somewhat easily susceptible to looks approach. Finally, Whether love poetry in the next 100 years will be any different, either more or less provocative, longer, shorter or more direct, only time will tell if it keeps up the similarities as held between pre twentieth and twentieth century love poems. ...read more.