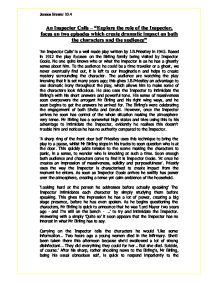 An Inspector Calls - "Explore the role of the Inspector, focus on two episodes which create dramatic impact on both the characters and the audience" 'An Inspector Calls' is a well made play written by J.B.Priestley in 1945. Based in 1912 the play focuses on the Birling family being visited by Inspector Goole. No one quite knows who or what the inspector is as he has a ghostly sense about him. To the audience he could be a time traveller or a ghost, we never eventually find out, it is left to our imagination and helps to create mystery surrounding the character. The audience are watching the play knowing that it is set many years ago; this gives J.B.Priestley an advantage to use dramatic irony throughout the play, which allows him to make some of the characters look ridiculous. He also uses the Inspector to intimidate the Birling's with his short answers and powerful tone. His sense of massiveness soon overpowers the arrogant Mr Birling and his right wing ways, and he soon begins to get the answers he arrived for. ...read more.

Carrying on the Inspector tells the characters he would 'Like some information... Two hours ago a young women died in the infirmary. She'd been taken there this afternoon because she'd swallowed a lot of strong disinfectant... They did everything they could for her... But she died. Suicide, of course.' After his sharp, rather shocking news to the Birling's, Mr Birling, being his usual obnoxious self, is quick to respond impatiently to the inspector. Telling the Inspector, 'Yes, yes horrid business...' this creates a sense of arrogance coming from Mr Birling, showing he doesn't really care what the Inspector has to say and questioning why he is being told if he isn't even concerned with such news. The Inspector is not friendly to the family and this is soon discovered when he answers to the Birling's using a short and blunt tone. The Inspector uses this way of speech to show he has not arrived for a friendly chat and is simply at the house for business. The Inspector's presence is soon resented by Mr Birling, as he sees no reason for the Inspector to be there. ...read more.

Before he exits, the Inspector reminds each family member of what they have done to help kill Eva Smith. Reminding them that they all shared responsibility for Eva's Death. This adds the final touch of guilt to the family, as they are then left to think and reminisce of the consequences of their actions. Both audience and characters are then left in silence which adds dramatic anxiety to the whole theatre. Not knowing whether the Inspector will come back as a consequence, or if he is gone for good. Priestley cleverly created this atmosphere as to make the audience then start thinking about the characters actions, and the way they deal with the situation being placed in front of them. This then takes us back to everything the family had said, and to Mr Birling's speeches before the Inspector arrived and interrupted. Making the audience continue discussing between themselves after watching the play about what Mr Birling had said and who they believe the Inspector really was, makes the well made play fill Priestley's expectations. At the end of 'An Inspector Calls' Priestley has very ingeniously got across his views on second wing politics and social responsibility, using the Inspector as his own voice. ?? ?? ?? ?? Jessica Brewer 10.4 ...read more.