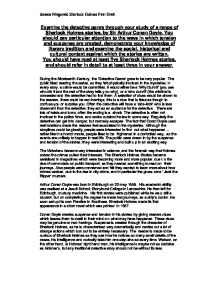 Examine the detective genre through your study of a range of Sherlock Holmes stories, by Sir Arthur Conan Doyle. You should pay particular attention to the ways in which tension and suspense are created, demonstrate your knowledge of literary tradition and examine the social, historical and cultural context against which the stories are written. You should have read at least five Sherlock Holmes stories, and should refer in detail to at least three in your answer. During the Nineteenth-Century, the 'Detective Genre' grew to be very popular. The public liked reading the series, as they felt physically involved in the mysteries. In every story, a crime would be committed, it would either be a 'Why Dunnit' (you see who did it and the rest of the story tells you why), or a 'who dunnit' (the criminal is concealed and the detective had to find them. A selection of clues would be shown to the readers, there could be red-herrings; this is a clue that is false as though to confuse you or surprise you. Often the detective will have a 'side-kick' who is less observant than the detective; they act as an audience for the detective. There are lots of twists and turns, often the ending is a shock. The detective is often not involved in the police force, and works outside the law in some way. Regularly the detective can get into danger, but narrowly escapes. ...read more.

This tells the readers Holmes is experienced with cases and he already has a series of clues in his head. We then see that Holmes is becoming aware of the element of danger; he predicts that there will be horrors before the night is over, and tries to convert his mind to a more cheerful matter, ''but we shall have more horrors enough before the night is over: for goodness' sake let us have a quiet pipe, and turn our minds for a few hours to something more cheerful''. This creates tension as it tells the viewers even Holmes is scared of the approaching danger, which tells us it must be horrifying as after all that Holmes has seen even he is becoming worried. Later in the story he advises Watson ,''...do not go to sleep; your very life may depend on it. Have your pistol ready in case we should need it. I will sit on the side of the bed and you in that chair.'' This is the sentence that tells us Holmes is prepared and is aware of what is coming. When he tells Watson not to go to sleep, and that his life depends on it, this builds tension as it shows death is in question and whatever is approaching is so dangerous that it may kill you. This frightens the readers and makes them feel worried and scared for Watson, Holmes and Miss Stoner. ...read more.

This again creates suspense and excitement as we know something big is on the verge to happen. Fear is created in the way the Lunatic is described as he sounds like a scary man physically. Tension in created as we know Holmes and his team are sitting, waiting, in a long pause, it lets us wonder if even Holmes is scared. To conclude I wish to talk about the detective genre today. As Sherlock Holmes stories were proven so popular in the past, it is no wonder that authors today have carried on the process of detective stories in the way that Conan Doyle did. They are still as popular today because the detective genre keeps the reader interested with its mysteries filled with clues, red- herrings to put you off, and fear, that you feel compelled to read because you know you will always be safe and not in danger watching it. My favourite story is 'The Man with the Twisted Lip' as it is totally unpredictable and surprising. It is strange as in the end you realise no crime has actually been committed; it is different to most of the other stories. I think Sherlock Holmes stories are so widely enjoyed today because of the traditional features of each story, and how they make people feel. Sherlock Holmes stories seem to be more than just reading a book, they are more interactive with the reader and allows them to guess and predict along with Holmes and Watson. ?? ?? ?? ?? Jessica Fitzgerald Sherlock Holmes First Draft ...read more.