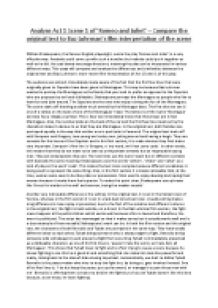 ﻿Analyse Act 1 Scene 1 of ?Romeo and Juliet? ? Compare the original text to Baz Luhrman?s film interpretation of the scene William Shakespeare, the famous English playwright, wrote the play ?Romeo and Juliet? in a very effective way. Anybody could come up with such a storyline but nobody could put it together as well as he did. He used barely any stage directions, meaning the play can be interpreted in various different ways. This essay will compare and analyse the differences and similarities between the original text and Baz Luhrman?s more recent film interpretation of Act 1 Scene 1 of this play. The audience are almost immediately made aware of the fact that the first few lines that were originally given to Capulets have been given to Montagues. This may be because Baz Luhrman wanted to portray the Montagues as the family that you tend to prefer as opposed to the Capulets who are proposed as evil and dislikeable. Shakespeare portrays the Montagues as people who like to have fun and joke around. The Capulets are the ones who enjoy ruining the fun of the Montagues. The scene starts off showing a yellow truck owned by the Montague boys. ...read more.

Usually setting makes a big difference to how a play is presented, due to the fact of the societies and different cultures. In the original text, the fight is held outside, on a street. In the Baz Luhrman film version, the fight scene happens at the petrol station which works well because a fire is caused and therefore, the event is publicised. The script has rearranged so that it makes sense but it actually works well and is a clear example of how versatile Shakespeare?s work can be. In both the film version and the original text, the characters of both Benvolio and Tybalt are portrayed in the same way. They have totally different views to each other; Tybalt being someone who is always eager to fight, Benvolio being someone who will always try and prevent a fight from occurring. Tybalt is immediately presented as a dislikeable character, as one of his first lines is, ?peace! I hate the word, as I hate hell, all Montagues?. This shows that Tybalt loves to fight and is often trying to cause a scene because he knows fighting is one this he is good at and something that can make him look like powerful and manly, linking back to the idea of status being important. ...read more.

Shakespeare writes, ?Love is a smoke raised with the fume of sighs; being purged, a fire sparkling in lovers? eyes?. He is using the technique of metaphors to express Romeo?s confusion as he is trying to work it out for himself. Shakespeare has also used various oxymorons to show Romeo?s confusion. For example, ?O brawling love! O loving hate!? Romeo is questioning is these things can even exist, because he is so confused. Also, the scripted words are still used in the film version, although they have been reorganised to make more sense. They have, in many cases, been given double meanings to fit in with the more recent time period. The storyline has not been changed at all from the original and is still recognisable as being the same play. In conclusion, there is about the same amount of differences and similarities between the script and the film version because of the fact that the play can be interpreted in various different ways. This makes every different version you watch interesting because, although the basic storyline will be the same, it will have been interpreted in a different way every time and there will always be certain aspects that will remain the same. All of this can be revealed just by looking at and analysing one small section of the play. ...read more.