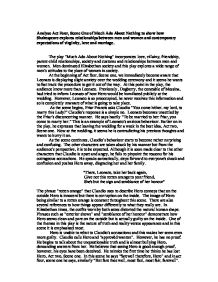 Analyse Act Four, Scene One of Much Ado About Nothing to show how Shakespeare explores relationships between men and women and contemporary expectations of virginity, love and marriage.

Analyse Act Four, Scene One of Much Ado About Nothing to show how Shakespeare explores relationships between men and women and contemporary expectations of virginity, love and marriage. The play "Much Ado About Nothing" incorporates love, villainy, friendship, parent-child relationships, society and customs and relationships between men and women. Men dominated Elizabethan society and this play explores a wide range of men's attitudes to the place of women in society. At the beginning of Act four, Scene one, we immediately become aware that Leonato is displaying slight anxiety over the wedding ceremony and it seems he wants to fast track the procedure to get it out of the way. At this point in the play, the audience know more than Leonato. Previously, Dogberry, the constable of Messina, had tried to inform Leonato of how Hero would be humiliated publicly at the wedding. However, Leonato is so preoccupied, he never receives this information and so is completely unaware of what is going to take place. As the scene begins, Friar Francis asks Claudio "You come hither, my lord, to marry this Lady?" Claudio's response is a simple no. Leonato becomes unsettled by the Friar's disconcerting manner. He says hastily "To be married to her: friar, you come to marry her." This is an example of Leonato's anxious behaviour. ...read more.

When lashing out at Hero, Leonato continuously uses the word "mine". It is all completely personal now and Leonato no longer cares for Hero, instead he cares solely for himself. The wedding ceremony is one of the main scenes in the play, which demonstrates that Messina, at that time, was a very patriarchal society. The characters in the play belong to a stylised, highly conventional world in which the mundane needs of everyday life fade into the background. No one has to earn a living, the wars are over and all may devote themselves to revelry. In such a world as this, demure daughters find their husbands in accordance with their rank and fortune and their marriage was arranged by their parents. In his play, Hero belongs to this world. A woman was legal property and was rarely expected to think for herself. And in Shakespeare's time, a woman's honour was based upon her virginity and chaste behaviour. For a woman to lose her honour by having sexual relations before marriage meant that she would lose all social standing, a disaster from which she could never recover. Moreover, this loss of honour would poison the woman's whole family. Consequently, when Leonato rashly believes Claudio's shaming of Hero at the wedding ceremony, he tries to alienate her entirely. ...read more.

Benedick says "Come, bid me do anything for thee." Beatrice replies with "Kill Claudio" These words are monosyllabic and the harsh alliteration is powerful and creates a big impact on the audience. She asks this as a way for Benedick to prove his love for her. Her demand essentially forces Benedick to choose between the brotherly love of men and the loyalty of a man to a woman. Beatrice's request is completely irrational and Benedick refuses. As a result, Beatrice erupts into a tirade of words and bitterness for her wronged cousin until Benedick says that he will challenge Claudio. Surprisingly, it seems Beatrice plays the more dominant role in this scene and talks with a man's licence. Although Much Ado About Nothing is set in Messina, Shakespeare is really exploring sixteenth century England and men's attitudes at this time. Hero is a stereotype in this play and Beatrice, who speaks her mind is seen as unusual. Throughout the play Shakespeare emphasises the superiority of men and the fact that a woman's future relied purely on her social status. He also conveys how virginity is imperative when it comes to marriage. Today, although virginity is less important when it comes to marriage and people marry for love, men and women are still not seen as equal. Even today men hold most senior positions and in eastern societies, many women still live in a highly male-dominated world. Alex Scaman ?? ?? ?? ?? ...read more.