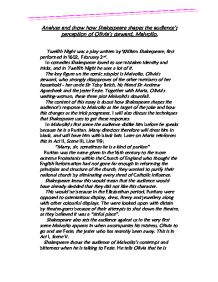 Analyse and show how Shakespeare shapes the audience's perception of Olivia's steward, Malvolio.

Analyse and show how Shakespeare shapes the audience's perception of Olivia's steward, Malvolio. Twelfth Night was a play written by William Shakespeare, first performed in 1602, February 2nd. In comedies Shakespeare loved to use mistaken identity and tricks, and in Twelfth Night he uses a lot of it. The key figure un the comic subplot is Malvolio, Olivia's steward, who strongly disapproves of the other members of her household - her uncle Sir Toby Belch, his friend Sir Andrew Aguecheek and the jester Feste. Together with Maria, Olivia's waiting-woman, these three plot Malvolio's downfall. The content of this essay is about how Shakespeare shapes the audience's response to Malvolio as the target of the joke and how this changes as the trick progresses. I will also discuss the techniques that Shakespeare uses to get these responses. In Malvolio's first scene the audience dislike him before he speaks because he is a Puritan. Many directors therefore will dress him in black, and will have him with black hair. Later on Maria reinforces this in Act II, Scene III, Line 119; "Marry, sir, sometimes he is a kind of puritan" Puritan was the name given in the 16th century to the more extreme Protestants within the Church of England who thought the English Reformation had not ...read more.

Firstly when Sir Toby obviously ignores him and is rude to him in the beginning when Malvolio insults him, and later when Sir Toby, Sir Andrew and Maria are talking about the plot. In Act II, Scene V Maria drops the letter and Malvolio finds it. He instantly thinks that it is for him, and as he is so self-inflated he instantly believes that his lady loves him. With this Shakespeare shows the significance of Malvolio fantasy at the beginning of this scene. "Daylight and champaign discovers not more: this is open. I will be proud, I will read politic authors, I will baffle Sir Toby, I will wash off gross acquaintance, I will be point-devise the very man. I do not now fool myself, to let imagination jade me; for every reason excites to this, that my lady loves me." Act II, Scene V, Line 133-137 I think Shakespeare uses this soliloquy to show how Malvolio really believes everything said in the letter. It is not signed to him or from Olivia exactly but he instantly takes it to be so. This gives the audience another reason to laugh at his pompousness. So far Shakespeare has only shown Malvolio in a bad light, showing his foolish side but as yet there has not been a scene that shows Malvolio to be a reasonable person. ...read more.

Malvolio's last line leaves the audience feeling a little sorry for him, but can sense his anger. Act V, Scene I, Line 355 "I'll be revenged on the whole pack of you !" But this is unfair to Olivia as she has done no wrong. She did not know of the plot or of anything to do with the trick played by her cousin and his friends. She genuinely thought he was mad. This is another pointer that shows just how angry Malvolio really is. During the play, a modern audience's perception and feelings towards Malvolio change dramatically. For the first two acts, the audience sees Malvolio as a pompous, self-centred man who claims to be a puritan and Shakespeare does this so that they can laugh at him. Yet during the third act we start to feel a little sorry for Malvolio as he is pushed down to supposed "madness". This continues throughout the play until the last scene, Act 5, Scene 1 when he escapes. In this scene the audience feels mixed emotions for him. At some points he is almost comical, yet it would not feel right to laugh at him. But I can see that if the trick had never been played on Malvolio then we never would have seen the other side to him. This shows that Malvolio is a man that cannot be judged at first sight. ...read more.