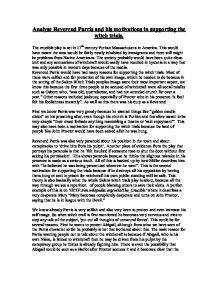 Analyse Reverend Parris and his motivations in supporting the witch trials.

Analyse Reverend Parris and his motivations in supporting the witch trials. The crucible play is set in 17th century Puritan Massachusetts in America. This would have meant the area would be fairly newly inhabited by immigrants and there still might be problems from Native Americans. The society probably would have been quite close-knit and any accusations of witchcraft would easily have resulted in hysteria in a way that was only possible in modern days because of the media. Reverend Parris would have had many reasons for supporting the witch trials. Most of these were selfish and for protection of his own image, which he needed to do because in the setting of the Salem Witch Trials peoples image were their most important aspect, we know this because the first three people to be accused of witchcraft were all social misfits such as Osborn who, "was old, quarrelsome, and had not attended church for over a year." Other reasons included jealousy, especially of Proctor who in his presence "a fool felt his foolishness instantly". ...read more.

This theory is also basically what the whole Salem witch trials play is about, because all the way through we see a repetition of people blaming others to save their skins. A perfect example of this is on 'HTTP://en.wikipedia.org/wiki/The_Crucible' where it describes a very desperate Mary "Mary becomes completely desperate and turns on John Proctor, saying that he is in league with the Devil." We know already Parris is very selfish and also very keen to protect and even increase his self image. So when witch craft is first mentioned he becomes very nervous and tries to stop any talk of the subject, 'put out all thoughts of unnatural forces'. This could be for several reasons. First he wants to protect Abigail, although from what we have seen of the Parris character so far he probably is not that bothered about this. The main reason for Parris wanting people not to talk about the witchcraft is because if Abigail, who is his own Niece, is linked to witchcraft then he may be driven from his pulpit by the conspiracy group he thinks is already fighting him. ...read more.

The final reason for Parris being jealous of Proctor and maybe even hating him is that Proctor is simply a good and honest man. Then there is Parris who 'there is very little good to be said of him'. Reverend Parris is meant to be a respectful member of Puritan society. However, before he moved to Salem he was a sugar plantation owner, owned slaves (such as Tituba) and was thought to have been a credit agent for other plantation owners. This quite shrewd and probably selfish personality shows in the crucible for instance when Abigail runs away he doesn't care for her but says "thirty one pound is gone" then says "I am penniless". This evaluation provides a good background to why Parris supported the witch trials. So overall Parris supports the Salem Witch trails because of a mixture of jealousy of Proctor, protecting his and his families image, a hatred of heathens and therefore witches, paranoia about the danger of his position as local Reverend and possibly the most important reason of all... is his greed. He wanted more pay and even gold candlesticks for his altar. ...read more.