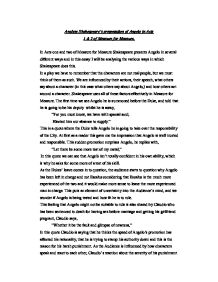 Analyse Shakespeare's presentation of Angelo in Acts 1 &amp; 2 of Measure for Measure.

Analyse Shakespeare's presentation of Angelo in Acts 1 & 2 of Measure for Measure. In Acts one and two of Measure for Measure Shakespeare presents Angelo in several different ways and in this essay I will be analysing the various ways in which Shakespeare does this. In a play we have to remember that the characters are not real people, but we must think of them as such. We are influenced by their actions, their speech, what others say about a character (in this case what others say about Angelo,) and how others act around a character. Shakespeare uses all of these factors effectively in Measure for Measure. The first time we see Angelo he is summoned before the Duke, and told that he is going to be his deputy whilst he is away, "For you must know, we have with special soul, Elected him our absence to supply." This is a quote where the Duke tells Angelo he is going to take over the responsibility of the City. At first as a reader this gave me the impression that Angelo is well trusted and responsible. This sudden promotion surprises Angelo, he replies with, "Let there be some more test of my metal," In this quote we can see that Angelo isn't totally confident in his own ability, which is why he asks for some more of a test of his skill. ...read more.

The "what shall become of me," part of that quote shows Angelo's lack of understanding of how the poorer people live in the city, the social agenda, the way many earn a living, and the poverty he will plunge people into if he stops a main source of income that people rely on. This doesn't make Angelo look like a very understanding character, but here we can sympathise with him a little. Angelo's problem is that he must be seen to be enforcing the law and, if he is seen to pick and choose between who gets punished and who doesn't he will look like a weak and biased governor. So he mustn't be seen "To make a scarecrow of the law," and the consequences of obeying the law to every letter, is that you will look hard and cold. The feeling that Angelo is a cold and heartless person is summed up in this quote from Lucio, "...Lord Angelo, a man whose blood Is very snow broth, one who never feels." It's clear to see here what Lucio thinks of Angelo. A strong description of Angelo used in this way will influence what the audience thinks of Angelo too, because at this point in the play Shakespeare doesn't give us a lot of insight into Angelo's background, inner thoughts or personality so having him described in such a harsh way leaves a blunt initial image in the audiences mind. ...read more.

"Oh cunning enemy that, to catch a saint, with saints dost bait thy hook! most dangerous." Angelo here is realising that he is being tempted, he says that the devil is tempting the good using good people, but we see the newness of this situation and emotion to Angelo when he says, "When men were fond, I smil'd and wondered how," Here Angelo is now admitting his physical attraction to Isabella and now he understands situations like Claudio's, but to the audience Angelo is starting to look like a hypocrite. Not so long ago he expressed his certainty in the sentence he gave Claudio and here he is now experiencing the same cycle of events. Shakespeare throws up various situations to Angelo, and the way he deals with them influences how the audience perceive his character. So far in the Play Shakespeare makes Angelo look like a hypocritical, cold and heartless. It's important not to forget to think of this as a play, and that the characters must be thought to have real feelings, so to get an accurate look into Angelo's personality we must take into account Angelo's situation, and how/what he says and does , and it's effect on others. Shakespeare throws up unexpected situations for Angelo that bring out the two extremes of his personality and moral decision making, it is these decisions that influence an Audiences perception of a character. ...read more.