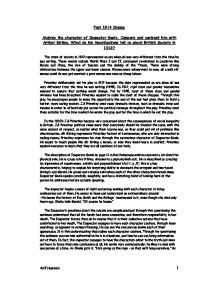 Analyse the character of Inspector Goole. Compare and contrast him with Arthur Birling. What do his investigations tell us about British Society in 1912? The state of society in 1912 represented an era when

Post 1914 Drama Analyse the character of Inspector Goole. Compare and contrast him with Arthur Birling. What do his investigations tell us about British Society in 1912? The state of society in 1912 represented an era when all was very different from the time he was writing. These events include World Wars I and II, communist revolutions in countries like Russia and China, the rise of fascism and the sinking of the Titanic. There were strong distinctions between the upper and lower classes. Women were subservient to men, all a well off woman could do was get married; a poor woman was seen as cheap labour. Priestley deliberately set his play in 1912 because the date represented an era when all was very different from the time he was writing (1945). In 1912, rigid class and gender boundaries seemed to ensure that nothing would change. Yet by 1945, most of those class and gender divisions had been breached. Priestley wanted to make the most of these changes. Through this play, he encourages people to seize the opportunity the end of the war had given them to build a better, more caring society. J.B Priestley used many dramatic devices, such as dramatic irony and tension in order to effectively put across his political message throughout the play. Priestley used them suitably for the time in which he wrote the play and for the time in which he set the play. In the 1930's J.B Priestley became very concerned about the consequences of social inequality in Britain. J.B Priestley political views were that everybody should be treated the same, with the same amount of respect, no matter what their income was, so they could get rid of problems like discrimination. ...read more.

Priestley uses dramatic irony to make Mr Birling look a fool. His predictions of the war and the Titanic on page 7 prove that he is not quite as clever as he looks, ("the world's developing so fast that it'll make war impossible.....the Titanic....absolutely unsinkable...in twenty or thirty years time you may be giving a little party like this....you'll be living in a world that'll have forgotten all these Capital versus Labour agitations.") He labelled the Titanic as unsinkable furthermore the chances of a war taking place as impossible. The play was set before the war, but was published after, so the audience know that Mr Birling is completely wrong. He shows little awareness of the world around him; he is quite complacent. He is boastful and pompous, making boring speeches to the younger people - again because he thinks he has earned the right to do this: "We can't let these Bernard Shaws and H G Wellses do all the talking. We hard-headed businessmen must say something sometime. We've had experience - and we know" (p.7). Mr. Birling always refers to capitalism (pg. 6, 7), business (pg. 6 "hard headed businessman," 10 "mind his own business") and profit (pg. 14, 15). The speech by Arthur Birling (page 9) - "when things are so much easier, is that a man has to make his own way - has to look after himself........a man has to mind his own business and look after himself and his own" differs to the Inspector's (page 56) - "we don't live alone. We are members of one body. We are responsible for each other" in various ways. ...read more.

J.B Priestley is leaving the audience to think about society then and now. He uses the Inspector as a representative; he is used a mouthpiece for Priestley's own socialist views. Through the Inspector, Priestley shows us that being wealthy is not enough, as well as being successful. What that means is that we have to take on responsibilities for others in our society. We cannot have privileges without the responsibility." Public men Mr Birling, have responsibilities as well as privileges." Priestley wants to show that if people look after one another and take collective responsibility in society then we will live in a much healthier cultural climate. I think Priestley wanted the audience to realise socialism is the way forward rather than capitalism. In this way, An Inspector Calls is very relevant in today's society where people still do need to work together and help others in need. The play suggests that the Inspector is not a real person. There are many clues in the text that imply this. His identity is a mystery; he is not a real policeman, even though Eric claimed, "He was our police inspector all right" (page 59). He did a good job at making each person admit their guilt. His name Goole sounds like 'ghoul', which is someone who has a morbid interest in death. His existence is as a result of the girl's death. Gerald finds out on his walk that there is no Inspector Goole on the Brumley police force. I think he is a hoaxer or some kind of spirit or ghost. The inspector's name implies a ghostly or spiritual connection, and with the twist at the end of the play it is obvious that the 'inspector' was talking about events yet to happen. ...read more.