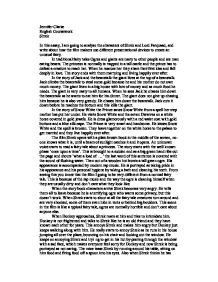 Analyse the characters of Shrek and Lord Farquaad, and write about how the film makers use different presentational devices to create an unusual fairy.

Jennifer Clarke English Coursework Shrek In this essay, I am going to analyse the characters of Shrek and Lord Farquaad, and write about how the film makers use different presentational devices to create an unusual fairy. In traditional fairy tales Ogres and giants are nasty to other people and are man eating beasts. The princess is normally is trapped in a tall castle and the prince has to defeat a creature to reach her. When he rescues her they share their first kiss and fall deeply in love. The story ends with them marrying and living happily ever after. In the story of Jack and the beanstalk the giant lives at the top of a beanstalk. Jack climbs the beanstalk to steal some gold because he and his mother do not own much money. The giant lives in a big house with lots of money and as much food he needs. The giant is very nasty to all humans. When he sees Jack he chases him down the beanstalk as he wants to eat him for his dinner. The giant does not give up chasing him because he is also very greedy. He chases him down the beanstalk. Jack cuts it down before he reaches the bottom and this kills the giant. In the story of Snow White the Prince saves Snow White from a spell her step mother has put her under. ...read more.

Lord Farquaad speaks to her in a cruel way, and orders his knights to 'Get that out of my site.' Lord Farquaad calls of the wedding, but he still proclaims to be King of Duloe. Lord Farquaad is deceptive because he should only become king when he marries a Princess. It is clear that Lord Farquaad does not love the Princess, but agrees to marriage because he is greedy and wants to become king. When a director is making a film it is important that he uses a variety of camera angles to create certain effects. At the beginning of the film, Shrek scares the storybook characters away and a close up shot is used. This is used to emphasise Shrek's features and to make him look a lot bigger and more frightening. Close up shots are also useful for focusing the viewers attention on the characters' emotion. Both Princess Fiona and Shrek can revel their true happiness through close ups of them smiling. The camera moves from one to the other and back again. Tension is created when Lord Farquaad is introduced. Instead of focusing on his face the camera shows his guard wearing a balaclava and the first shot is on his feet. This makes Lord Farquaad look very tall and powerful. When Shrek Visits Lord Farquaad's castle, the camera moves from ground level upwards to revel his tower. ...read more.

One thing he makes friend with a Donkey and a Princess which you would not expect at all with an ogre. Also he rescues a Princess from a castle which is guarded by a fire breathing dragon just so he can have his swamp back, and have some privacy. He falls in love with Princess Fiona, who turns into an ogre and they get married and live happily ever after. Although Lord Farquaad looks like a hero his actions suggest that he is evil. This is because he tortured the Gingerbread Man just so he would tell him things. He stole Shrek's swamp and sent all the fairy tale creatures to live there. He also told his knights they may die on the quest but he is willing to take the risk, and then he makes them fight Shrek. When he finds out Princess Fiona turns into an ogre at sunset he rejected her immediately and called her all sorts. Even though he didn't get married to the Princess he still claimed to be king which was impossible because he had to be married to a Princess to become king. The story Shrek uses presentational devices to reverse our expectations, so that by the end of the film we all despise Lord Farquaad because of all the nasty and evil thing he has done. We Love Shrek because he rescued Fiona from the Dragon and Lord Farquaad and he is generally a nice ogre. ...read more.