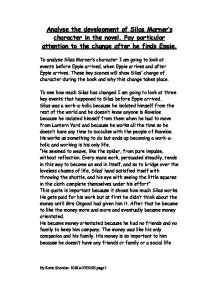 Analyse the development of Silas Marner's character in the novel. Pay particular attention to the change after he finds Eppie.

Analyse the development of Silas Marner's character in the novel. Pay particular attention to the change after he finds Eppie. To analyse Silas Marner's character I am going to look at events before Eppie arrived, when Eppie arrives and after Eppie arrives. These key scenes will show Silas' change of character during the book and why this change takes place. To see how much Silas has changed I am going to look at three key events that happened to Silas before Eppie arrived. Silas was a work-a-holic because he isolated himself from the rest of the world and he doesn't know anyone is Raveloe because he isolated himself from them when he had to move from Lantern Yard and because he works all the time so he doesn't have any time to socialise with the people of Raveloe. He works as something to do but ends up becoming a work-a-holic and working is his only life. "He seemed to weave, like the spider, from pure impulse, without reflection. Every mans work, persuaded steadily, tends in this way to become an end in itself, and so to bridge over the loveless chasms of life, Silas' hand satisfied itself with throwing the shuttle, and his ...read more.

It is like an illness. "that on coming up to him he saw that Marner's eyes were set like a dead man's, and he spoke to him, and his limbs were stiff, and his hands clutched the bag as if they'd been made of iron; but just as he had made up his mind that the weaver was dead, he came alright again, like, as you might say in the winking of an eye, and said "good night", and walked off." Having fits is Silas' way of escaping from his life and forgetting about it for a while. Eppie comes to Raveloe with her mother, Molly Farren, because Molly is determined to tell Squire Cass that his son, Godfrey has a wife and daughter. Due to Molly's addiction to opium she is unwell. As she is walking through the snow with Eppie in her arms she collapses and dies. Eppie follows a cat to Silas' cottage. He feeds her and cares for her. Then he follows her footprints in the snow to find her dead mother. Silas goes to Squire Cass for help. Godfrey is confused by the child in Silas' arms but is pleased that Molly is dead because he hadn't told anyone about his marriage and child. ...read more.

Since Eppie arrived Silas has had a responsibility for her. He cares for her. "Marner took her on his lap, trembling with an emotion mysterious to himself, at something unknown dawning on his life. Thought and feeling were so confused within him, that if he had tried to give them utterance, he could only have said that the child was come instead of his gold - that the gold had turned into the child." This shows that Silas cares for Eppie and loves her. His responsibilities had turned into love and care. He cares for Eppie more than he cared for his gold. Eppie is worth more than all of his Gold that he had. In order to analyse the development of Silas Marner's character in the novel I have paid particular attention to the change after he finds Eppie. Before Silas finds Eppie he was money orientated, work-a-holic, isolated, bitter old man. After he found Eppie she changed his life completely. He changed to a positive, friendly, not money orientated or a work-a-holic man and he changed from being unsociable to being a main part of the community. By Katie Sheridan 10JKa 07/02/03 page1 ...read more.