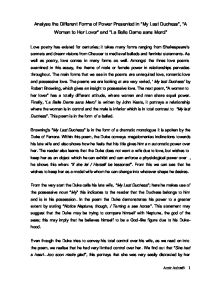 Analyse the Different Forms of Power Presented in "My Last Duchess", "A Woman to Her Lover" and "La Belle Dame sans Merci" Love poetry has existed for centuries; it takes many forms ranging from Shakespeare's sonnets and dream visions from Chaucer to medieval ballads and feminist statements. As well as poetry, love comes in many forms as well. Amongst the three love poems examined in this essay, the theme of male or female power in relationships pervades throughout. The main forms that we see in the poems are unrequited love, romantic love and possessive love. The poems we are looking at are very varied, 'My last Duchess' by Robert Browning, which gives an insight to possessive love. The next poem, "A woman to her lover" has a totally different attitude, where women and men share equal power. Finally, 'La Belle Dame sans Merci' is written by John Keats, it portrays a relationship where the woman is in control and the male is inferior which is in total contrast to "My last Duchess". This poem is in the form of a ballad. Browning's "My Last Duchess" is in the form of a dramatic monologue it is spoken by the Duke of Ferrara. Within this poem, the Duke conveys megalomaniac inclinations towards his late wife and also shows how he feels that his title gives him an automatic power over her. ...read more.

The reader also realises that the poetic voice in "A woman to her lover" believes that equality between the two sexes is vital to insure the smooth running of a relationship. It is ironic that in "My last duchess" it was the equality that the Duke and the Duchess had between them which was the problem in their relationship. The reader always feels that the poetic voice is very self-assured and confident. In the opening line she says "Do you come to me to bend me to your will". Here she directly addresses the reader, which in this case is her lover. In 18th century Britain, it would have been shocking for a woman to speak to a man in such a discourteous manor - let alone publish her own material; this shows her bold and audacious nature. Her strong character is amplified by her use of powerful vocabulary, for instance, words like "bend", "bondslave" and "drudgery", show her fearless character and also how strongly she wants equality. Her tone and register is very similar to the Duke's, as they are both confident, dominating and come across as very powerful. However the power they display isn't their true nature, which is another parallel between the two characters. The Duke may appear to be powerful, but through a closer inspection we see his insecurity, and for the most part of the poem the woman may appear to be controlling but at the end she reveals her true self. ...read more.

As all Greek myths had an underlying story or message, in the case of the sirens it was a warning that women can be sly and manipulative towards men's sexual weaknesses. The story of the knight and the Faery conveys the same message, and displays how women are not necessarily weaker than men, contrary to the stereotype at the time. The love in this poem is described very negatively. As we see the man tortured by love and is left on 'a cold hill side', we see the very damaging effect love had on him, from this we could say that yes it was presented entirely negatively but it was not. In the middle of the poem we actually see blissful love as the man was blinded by the amazing love he felt for the woman, 'and nothing else saw all day long'. In conclusion we can see that the idea of feminist power and dominance exists in all of them. However each writer portrays women and their power in different ways - Browning depicts them as inferior to men, Walsh seeks to show the competence of women while the woman in Keats' poem possesses supernatural powers. The main thing that the three poems teach us is that the role of the sexes in a relationship can change, depending on the type and amount of power they posses - the male can be the one who is trapped and exploited while the women emerges as the dominant one. ?? ?? ?? ?? 1 Amir Ashrafi ...read more.