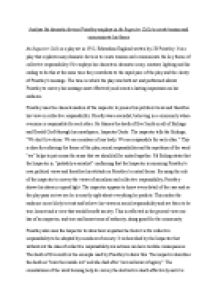 ﻿Analyse the dramatic devices Priestley employs in An Inspector Calls to create tension and communicate his theme An Inspector Calls is a play set in 1912, Edwardian England written by J.B Priestley. It is a play that exploits many dramatic devices to create tension and communicate the key theme of collective responsibility. He employs his characters, dramatic irony, contrast, lighting and his ending to do this at the same time they contribute to the rapid pace of the play and the clarity of Priestley?s message. The time in which the play was both set and performed allows Priestley to convey his message most effectively and create a lasting impression on his audience. Priestley uses the characterisation of the inspector to present his political views and therefore his view on collective responsibility. Priestly was a socialist, believing in a community where everyone is responsible for each other. He blames the death of Eva Smith on all of Birlings and Gerald Croft through his mouthpiece, Inspector Goole. The inspector tells the Birlings, ?We don't live alone. We are members of one body. We are responsible for each other.? This is directly enforcing the theme of the play, social responsibility and the repetition of the word ?we? helps to put across the sense that we should all be united together. Mr Birling states that the Inspector is, ?probably a socialist? confirming that the Inspector is mirroring Priestley?s own political views and therefore his attitude on Priestley?s central theme. By using the role of the inspector to convey the views of socialism and collective responsibility, Priestley shows his ideas in a good light. The inspector appears to know every detail of the case and as the play pans out we see he is exactly right about everything he predicts. This makes the audience more likely to trust and believe his views on social responsibility and see them to be true, honest and a view that would benefit society. ...read more.

Eric reflects the same opinions as Sheila after learning the part he plays in Eva Smith?s death, ?it?s what?s happened to that girl and what we did to her that matters?. This shows how Eric views the responsibility they had for Eva Smith as the only important thing. Priestley therefore uses these characters to positively contrast to the opinions of Mr and Mrs Birling to show collective responsibility as an optimistic thing. He shows the characters positively growing as people through acknowledging their responsibility. This mirrors what he feels would happen to the country if collective responsibility was adopted. Priestley uses contrast in his lighting to show how naive and foolish the Birling?s are in their opinions and how the inspector brings a harsh truth to them. The highly specific introductory stage directions state the lighting ?should be pink and intimate until the inspector arrives and then it should be brighter and harder?. I think the lighting first used creates the sense that the Birling?s are looking through 'rose-tinted glasses' with an unduly cheerful and naive view of their life. This is because they only look after themselves and through the capitalistic system; they have benefitted hugely and are very wealthy. It is for this reason they do not concern themselves with anyone else?s problems especially those of the lower classes. The lighting and the idea they are looking through ?rose tinted glasses? shows that that this 'warm' and 'joyful' atmosphere is not really what it seems. This is confirmed when the Inspector appears and the lighting changes to a "brighter and harder light" where it gives the impression of exposure of the truth. This harsh truth is the devastating consequences of when people do not realise their responsibility for one another and do not view society as a community. It is this Priestley wants the audience to take heed of. Priestley times the Inspector?s entrance perfectly which not only prepares the reader for the main theme but the importance it is to have throughout the play too. ...read more.

The stage directions describe Mr. Birling as saying things, ?somewhat impatiently? and he repeatedly states in different ways the blunt fact, ?I can?t accept any responsibility?. This conflict inevitably creates tension for the audience. As well as this type of conflict, there is also conflict created between the members of the Birling family. For Example, when Sheila talks to Gerald about ?last summer, when you never came near me and I wondered what had happened to you?. Gerald vaguely states he was busy and the audience get a sense of underlying secrecy when Sheila states, ?that?s what you say?. This creates tension between the characters and for the audience as they wish to know what actually happened. Priestley also uses accusations and uneasy laughter between the members of the Birling family, such as ?unless Eric has done something? in order to build up tension. This provokes thought within the audience as to whether Eric has done something, inevitably creating tension as the answer to this is unknown. This tension is increased through hinting from Priestley that the family have actually done something wrong. For instance Mr Birling emphasises, ?so long as we behave ourselves?. It is therefore clear to see, that without doubt J.B Priestley uses his characters, dramatic irony, contrast, lighting and his ending to great effect in communicating his main theme and creating tension. Tension is successfully employed by Priestley, using mainly conflict between his characters and the character of the inspector to control the pace of the plot with the ending cliff hanger leaving his audience wanting more. Yet at the same time, Priestley uses these same devices, most significantly his uses his characters to convey not only his views of socialism and his key theme but uses contrast and dramatic irony to show the downfalls of capitalism. In addition to this the Inspector, lighting and the ending are also used to enforce the importance of collective responsibility. Leaving the audience with the clear message that, ?We are members of One Body?. ...read more.