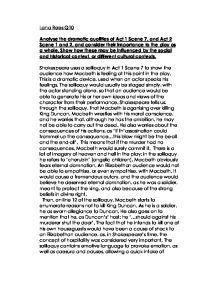 Analyse the dramatic qualities of Act 1 Scene 7, and Act 2 Scene 1 and 2, and consider their importance to the play as a whole. Show how these may be influenced by the social and historical context, or different cultural contexts.

Lana Rees Q10 Analyse the dramatic qualities of Act 1 Scene 7, and Act 2 Scene 1 and 2, and consider their importance to the play as a whole. Show how these may be influenced by the social and historical context, or different cultural contexts. Shakespeare uses a soliloquy in Act 1 Scene 7 to show the audience how Macbeth is feeling at this point in the play. This is a dramatic device, used when an actor speaks his feelings. The soliloquy would usually be staged simply, with the actor standing alone, so that an audience would be able to generate his or her own ideas and views of the character from their performance. Shakespeare tells us, through the soliloquy, that Macbeth is agonising over killing King Duncan. Macbeth wrestles with his moral conscience, and he worries that, although he has the ambition, he may not be able to carry out the deed. He also worries about the consequences of his actions, as 'If th'assasination could trammel up the consequence...this blow might be the be-all and the end-all'. This means that if the murder had no consequences, Macbeth would surely commit it. There is a lot of imagery of heaven and hell in the play; in the soliloquy he refers to 'cherubin' (angelic children). ...read more.

An audience of today would probably not be too shocked by a dominant woman in a relationship; as now women and men are equal, but the even the idea of killing an innocent child would shock them, as it would an Elizabethan audience. In Elizabethan times, the man should be in control. Women of Shakespeare's' time would perhaps be a little drawn in by this, as it is something that they have never seen before. Act 2 Scenes 1 and 2 Act 2 Scene 1 is a short scene containing another soliloquy from Macbeth. The scene takes place in a courtyard at night. There is a lexical field of supernatural, where Banquo states that the clock 'goes down at 12'. Midnight is the time where dark spirits are supposed to come out, and at the time anything unexplainable was blamed on witchcraft. During Macbeths soliloquy, Macbeth is tormented by fear of the unknown, and he envisions a dagger, which Elizabethans would, again, link to being supernatural, and therefore be found scary, a source of tension and confusion. At the time it would probably have been staged quite simply, perhaps the dagger wouldn't appear physically, as this would scare the audience, that Macbeth would be seeing something that they couldn't see. ...read more.

Lady Macbeth is very anxious, as she uses short imperatives when conversing with Macbeth. There is a religious lexical field, 'god' 'prayers' 'amen' etc. Macbeth's states that Amen got stuck in his throat, and not being able to say the word implies that god will not bless him, so he is doomed to eternal damnation. A Christian audience would probably be dismayed and disgusted at this point, that Macbeth can so willingly go against God, and shocked to find that if you commit murder, God will no longer bless you. He goes on to say he heard voices telling him he will sleep no more, as we know that being able to sleep calmly implies innocence. On a stage, Macbeth could either be portrayed as talking to himself, or telling his wife his story desperately, as if she can do something to help him. Macbeth is guilty and remorseful, and unable to face his crime. Lady Macbeth lacks fear or conscience. She is cold-blooded, and will do anything to avoid blame. On the other hand, Macbeth is disgusted with what he has done, and feels that he will never be rid of the blood on his hands. This scene is significant to the whole play as it displays the differences between husband and wife, that although he committed the murder, she is in fact devoid of guilt or shame, though he is remorseful. http://www.srvc.net/engl154/html_files/Mac_Lecture.htm ...read more.