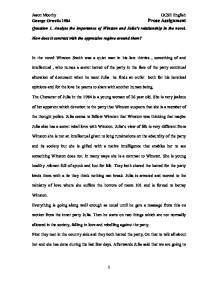 Analyse the importance of Winston and Julia's relationship in the novel. How does it contrast with the oppressive regime around them?

Question 1. Analyse the importance of Winston and Julia`s relationship in the novel. How does it contrast with the oppressive regime around them? In the novel Winston Smith was a quiet man in his late thirties , something of and intellectual , who nurses a secret hatred of the party in the face of the party continual alteration of document when he meet Julia he finds an outlet both for his heretical opinions and for the love he yearns to share with another human being. The Character of Julia in the 1984 is a young woman of 26 year old. She is very jealous of her apparent which devotion to the party that Winston suspects that she is a member of the thought police. Julia seems to follow Winston that Winston was thinking that maybe Julia also has a secret rebel love with Winston. ...read more.

First they met in the country side and they both hatred the party, On that to talk all about her and she has done during the last few days. Afterwards Julia said that we are going to meet here again in another month or two. Winston manage to get a room , for them so that can meet there in that secret place without anybody find out, of course in that room there is no telescreen . The relationship of the couple Julia and Winston is one of enrichment, sexual and intimate. At the beginning of their relation they started having sex. At first it seems that this is just a form of rebellion against the obviously repressive society. This perhaps true of Julia especially since she brings contraband food to one their meeting on that day it seems that she associates sex as a forbidden thing . ...read more.

They were finally caught and they were sending to the ministry of love where they were torture. Winston is tortured in room 101 by O'Brien with rats represents a person's worst fear and Winston's worst fears is rats. Which leads him to betray Julia, he is finally released no longer a man after having the humanity beaten and manipulated out of him and completely to love the party and big brother . Julia is tortured in room 101 and is forced to betray Winston when they meet again after their respective releases, Julia is much changed spiritless physically broken, holding a vague dislike for Winston. The body of a corpse suggests that Julia is dead that her personality has been beaten down and extinguished that she, like Winston is nothing but a shell. ...read more.