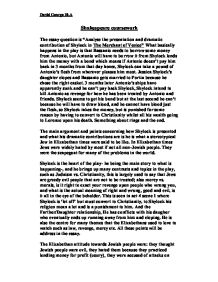 &quot;Analyse the presentation and dramatic contribution of Shylock in The Merchant of Venice&quot;

Shakespeare coursework The essay question is "Analyse the presentation and dramatic contribution of Shylock in The Merchant of Venice" What basically happens in the play is that Bassanio needs to borrow some money from Antonio, but Antonio will have to borrow it from Shylock lends him the money with a bond which means if Antonio doesn't pay him back in 3 months from that day hence, Shylock can take a pound of Antonio's flesh from wherever pleases him most. Jessica Shylock's daughter elopes and Bassanio gets married to Portia because he chose the right casket. 3 months later Antonio's ships have apparently sunk and he can't pay back Shylock, Shylock intend to kill Antonio as revenge for how he has been treated by Antonio and friends. Shylock seems to get his bond but at the last second he can't because he will have to draw blood, and he cannot have blood just the flesh, so Shylock takes the money, but is punished for some reason by having to convert to Christianity whilst all his wealth going to Lorenzo upon his death. Something about rings and the end. The main argument and points concerning how Shylock is presented and what his dramatic contributions are is he is what a stereotypical Jew in Elizabethan times were said to be like. ...read more.

Being offended by how Shylock is presented is understandable but they fail to realise when it was written, and what the common opinion of people on this subject would be. They fail to see things in context of the times. If this was a modern play it would be banned for it portrayal of Jews, however people these days don't know what they want. If it was modern and was banned people would want it to be un-banned because of 'freedom of speech' but if it wasn't banned people would demand it be banned because of it's racist views. Shakespeare presents Shylock as greedy, and hateful of the Christians. He does this so that people lose all sympathy for Shylock and make them sympathise with the Christian characters more. This is used to the point of making people wanting Shylock punished for how he was so un-merciful to Antonio. As well as this it is used to help the story progress, and show the significance of certain aspects of the story, such as when Jessica trades Shylocks most expensive ring for a monkey, this is to show that something so precious to Shylock is used to buy something completely stupid, this may also have purposely been done to spite him. Shakespeare also uses many techniques in Shylock's speech. ...read more.

Because of Shylock we get the story of is Antonio going to get killed or not, will Shylock be merciful? Etc. He is also used as the person, who brings about different elements of the play that an Elizabethan audience would like to watch; he brings up the idea of Christianity vs. Judaism, mercy vs. the unmerciful, of principles and morals, the themes of law, revenge, mercy, etc. all of which were very popular in Elizabethan times. He is used to build up the tension and suspense, the question will he spare Antonio or not? He is an Elizabethan stereotype of a Jew and he shows the relationship between the father and daughter. This is all done by Shylock and makes the play what it is, without his character not much could happen and the play would be very boring. In conclusion Shylock is the most important character in this play even though he is no the main character or hero. He is the plot itself and without him the play couldn't exist. Shylock is the perfect Elizabethan stereotype of a Jew and Shakespeare done this on purpose to create he affect, and to build reflect in what people though of them at the time. In the Elizabethan times Shylock was a character to be hated, but in the modern day you find people sympathising with him rather than hating him. David George 10.A ...read more.