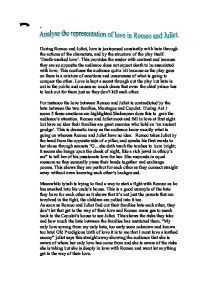 Analyse the representation of love in Romeo nad Juliet

- During Romeo and Juliet, love is juxtaposed constantly with hate through the actions of the characters, and by the structure of the play itself. 'Death-marked love'. This provides the reader with contrast and because they are so opposite the audience does not expect death to be associated with love. This confuses the audience quit a bit because as the play goes on there is a mixture of emotions and unsureness of what is going to conquer the other. Love is kept a secret through out the play but hate is out in the public and causes so much chaos that even the chief prince has to look out for them just so they don't kill each other. For instance the love between Romeo and Juliet is contradicted by the hate between the two families, Montague and Capulet. During Act 1 scene 5 these emotions are highlighted.Shakespear does this to grab the audience's attention. Romeo and Juliet meet and fall in love at first sight but have no idea their families are great enemies who hold an 'an ancient grudge'. ...read more.

- Love is also strongly represented in act 3 scene 1 after Romeo and Juliet get married. Tybalt comes to confront him about why he sneeked into the party at his uncle's house. "Romeo the hate I bear thee can afford No better term than this, thou art a villain." Tybalt continued to push for conflict not understanding Romeo's unwillingness However, knowing that they are now related, Romeo decides to keep calm and not start a fight knowing Juliet will be unhappy if a fight was to start and one of them were to get hurt. "I do protest i never injured thee but love thee better than thou canst devise till though shall know the reason of my love." Mercutio then jumps in to defend Romeo. In the end he ends up getting killed by tybalt as a result of love and loyalty to his friend Romeo. Without thinking, Romeo uses his rage and grief to slay Tybalt. "And fire-eyed fury be my conduct now!" ...read more.

This shows the effect the family feud has on Juliet since she has all of a sudden changed from the little obedient girl that she was and now actually talking back to her parents. This sets Capulet in a bad mood and he threatens Juliet. This causes Juliet to take drastic action to be with the one she loves resulting in tragic consequences. The ending of this play show how love and hate can be such a bad mixture as it ends in such a tragic as illustrated in this play although it ends in a tragic way, the families are forced to set aside their differences and learn to get along as they see that all this was their fault. In my opinion i believe Shakespeare was really clever juxtaposing love and hate. I think he was trying to send a message that you can't have it all and when you have something good, there is always something bad trying to ruin your happiness. This results in tragic endings if not handled right. ...read more.