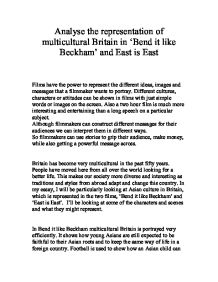 Analyse the representation of multicultural Britain in 'Bend it like Beckham' and East is East Films have the power to represent the different ideas, images and messages that a filmmaker wants to portray. Different cultures, characters or attitudes can be shown in films with just simple words or images on the screen. Also a two hour film is much more interesting and entertaining than a long speech on a particular subject. Although filmmakers can construct different messages for their audiences we can interpret them in different ways. So filmmakers can use stories to grip their audience, make money, while also getting a powerful message across. Britain has become very multicultural in the past fifty years. People have moved here from all over the world looking for a better life. This makes our society more diverse and interesting as traditions and styles from abroad adapt and change this country. In my essay, I will be particularly looking at Asian culture in Britain, which is represented in the two films, 'Bend it like Beckham' and 'East is East'. I'll be looking at some of the characters and scenes and what they might represent. ...read more.

She tells the story of the whole film in 10 seconds. 'Indian girls aren't supposed to play football'. She also says that she will be marrying an Indian, not an English, Hindu or Muslim man. Her mothers will is still strong over her, but her real passion football is immune and Jess will strive to almost any length to play, even if it means leaving her sisters wedding. Jess comes to the aid of the Harriers and arrives for a match where an American scout is watching. Jess comes off the bench and scores with an unstoppable freekick to win the match 2-1. The director is clever by showing her relatives dressed in traditional Sikh dresses in the defensive wall, in Jess' mind. This shows Jess' torn feeling between her Indian and English identity. Also the scene shows a customary Indian celebration, and Sikh wedding against an English one, and goal celebration, through fading and quick straight cuts. The clothes worn by the family at the wedding are typically Indian, while Jess feels awkward wearing shorts as her mother would strongly disapprove during the match. ...read more.

While Bend it like Beckham has its storyline revolving around football and Jess' 'bending of the rules' East is East has its storyline much more based around Family loyalties and the position the family is in. It shows more of the children's resistance of George and their will to overpower him. There is an enormous similarity though; the older generation want things to remain as they are while the younger generation want things to change. While George is more aggressive and violent, Jess' mother is strong willed and easily disappointed. Bend it like Beckham has characters which represent certain attitudes to do with multiculturalism like the relationship between older and younger generations. It deals with a Sikh family in London while East is East has a Pakistani Muslim family who live in Manchester. East is East deals with more issues like arranged marriages, circumcision, going to Bradford where the Asian population is much higher. Both films leave a positive and negative impression on audiences about multicultural Britain. They show that overall foreigners are welcome in the country and at the same time are allowed to recreate their own culture within their new environment. The films also portray the typical conduct of Asian families from generation to generation. The representation of multiculturalism in both films is powerful and unique. ...read more.